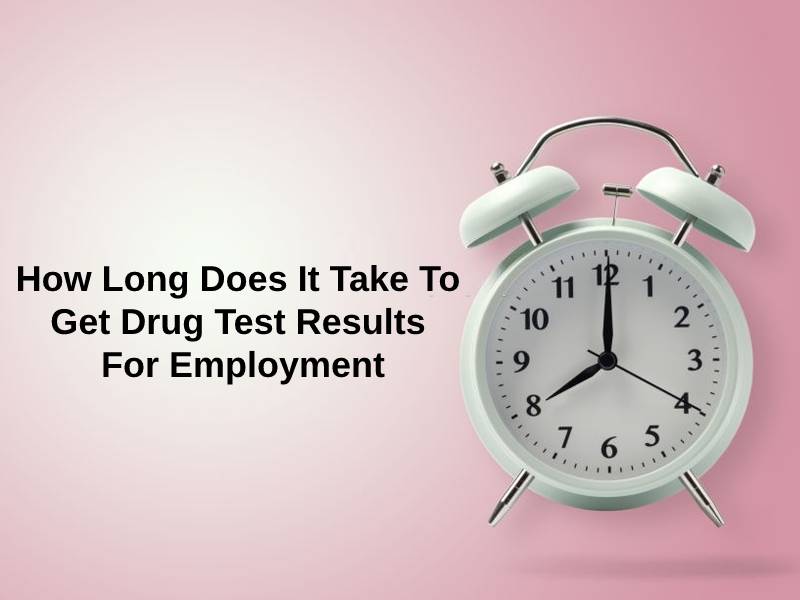 The most common types of drugs tested by employers are cocaine, opioids, marijuana, PCP, and amphetamines. Not only these employers may even test for alcohol and a higher percent of prescribed drugs containing sedatives and opioids. These tests are done as per the National Institute on Drug Abuse employees with a drug habit can cost a company anywhere upwards of $740 billion per year.

Thus the employers want someone who has little or no dependency on not only drugs but also alcohol, sedatives, and so on. As then the company losses money and also the work which is done is not up to the standard it could have been.

How Long Does It Take To Get Drug Test Results For Employment?

It really depends on various factors, like the initial results, the lab doing the tests, and more importantly what the sample being tested. If a test is negative then the employer can get back the result as early as 24 hours but if the test is positive then additional tests have to be done to determine the content and type of drug in the system. A doctor may even call the potential employee to know the prescribed drugs they are taking or any other herbal medicines they might be taking. The different types of samples collected are urine, hair, saliva and blood.

So with a positive test result, it can take up to five business days to get back the results. Not only for employment in an office, but athletes who are employed under various clubs also have to undergo drug testing as well. Even though the drugs tested are different from the standard tests and these include tests for anabolic steroids, erythropoietin, diuretics, and human growth hormones.

The different types of drug tests:

Why Does It Take So Long To Get Drug Test Results For Employment?

The time taken to do a result entirely depends on the type of sample collected for drug testing. For urine samples collected there are two test screens that can be used, one is immunoassay and the other is gas mass/chromatography. In the former case, it is a quick test but it often gives a false positive result so the efficiency is low. The GC/MS test can then be done for confirmation.

RECOMMENDED
How Long Is A Human Umbilical Cord (And Why)?

Blood tests can accurately determine the alcohol level in the blood and also other drugs even though it is more time-consuming. This test is done when a person is actively abusing drugs and the authority needs a confirmation of the sample. The sample is taken via a syringe and collected in a test tube and send for testing, it is important to store it in a temperature-regulated and clean place so that it is not contaminated somehow.

The hair follicle test is done to detect the overuse of prescribed medicines like certain sedatives and even cough syrups. The major advantage of this test is that the drug remains in the hair follicle for 90 days and thus it gives a good history of drug abuse.

In conclusion, it can be said that negative tests require less time than positive ones, as the latter requires more subsequent testing to determine the type of drug in the system. Drug testing is important as it improves employee morale, work standard, productivity, and performance.

Drug abuse can lead to more absentees, downtime, problems with the law, and even violent tendencies. So to have an overall healthy environment, more productivity, and a positive outlook of the employees it is important to perform a drug test and also helps the ones going through a drug usage issue.