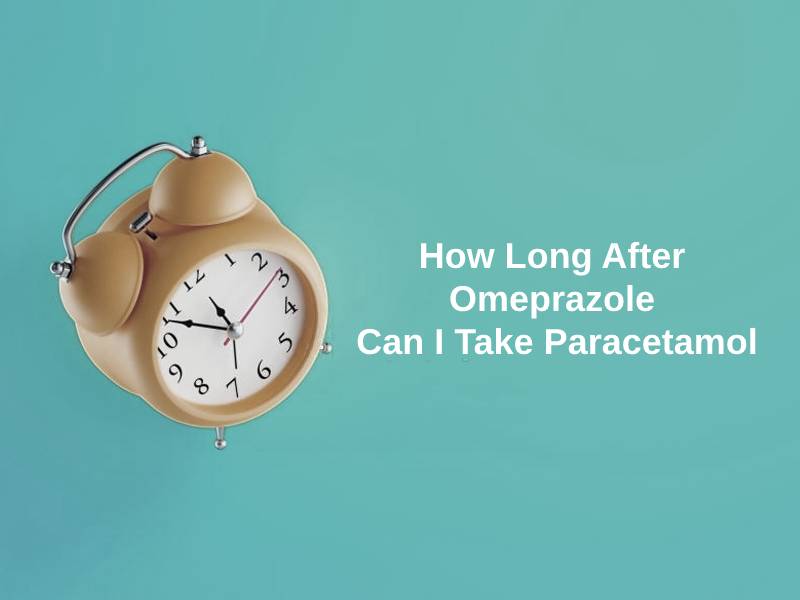 Exact Answer: Can be taken simultaneously

Omeprazole comes under the proton pump inhibitor (PPI) branch of medication. It is essentially prescribed to reduce stomach acid, in order to treat many digestive complications. It comes in three types of dosages, including delayed-release capsules, granules for oral suspension, and tablets. In addition, each of the types is available in different strengths. Omeprazole is usually prescribed to patients with respect to their weight, as the dosage relies on this factor.

Paracetamol is one of the most prescribed painkillers across the world. It is used to treat pain and aches. In addition, it is found combined with many painkillers and anti-sickness medication and is also found in many flu and cold medication. Paracetamol is available in syrup-form, and soluble tablets, normal tablets, and capsules.

How Long After Omeprazole Can I Take Paracetamol?

As a PPI, Omeprazole reduces the acid that is present in the stomach, in order to heal the affected stomach lining. This helps treat a variety of digestive problems, such as heartburn and acid reflux. According to the Food and Drug Administration (FDA), you may be prescribed omeprazole capsules and granules if you have stomach and intestinal ulcers, gastroesophageal reflux disease (GERD), GERD-induced erosive esophagitis and its healing, Helicobacter pylori infections, and Zollinger-Ellison syndrome.

Omeprazole is usually recommended by doctors, to be taken 30 to 60 minutes before a meal. The omeprazole pill takes up to 1 hour to start blocking the release of acid, and it comes to a peak at around 2 hours after ingestion of the pill, where its full effect is felt. Over the course of the next three to four days, the effect of the pill remains.

Paracetamol, on the other hand, is a common painkiller that is prescribed to treat mild to moderate pain, and fever. Paracetamol usually comes in 500 mg tablets, and the normally prescribed dosage is one or two tablets at a time, with each tablet working in an hour. Contrary to omeprazole, paracetamol can be ingested with or without food.

PPIs and painkillers hardly ever react together, which is why both omeprazole and paracetamol are safe to be taken at the same time.

Why Does It Take That Long To Take Paracetamol After Omeprazole?

Proton pumps or hydrogen-potassium pumps that are situated in the stomach’s inner lining, release acid into the stomach. Since omeprazole is a PPI, it inhibits the function of the proton pump, preventing it from working properly. Thus, lowering the acidity of the stomach by halting the release of acid into it.

RECOMMENDED
How Long After Cramps BFP (And Why)?

Although scientists haven’t arrived at a solid conclusion about its function, they speculate that paracetamol works by blocking the chemical messengers located in the brain responsible for indicating that we are in pain. Additionally, it affects the chemical messengers that control your body temperature, in order to reduce fever.

Some of the side effects of omeprazole are headache, nausea, diarrhea, vomiting, flatulence, and abdominal pain in adults. Children, often report fever, pharyngitis, and sinus infections. In serious cases, patients who take omeprazole occasionally suffer from kidney dysfunction.

Paracetamol causes some to have a very serious but rare allergic reaction called anaphylaxis. Side effects include a skin rash that is itchy, swollen, and blistered, wheezing, tightness in the chest or throat, difficulty in breathing, and swelling of the face, mouth, lips, and more.

Omeprazole can safely be ingested with paracetamol, but the same doesn’t go for other medicines. Omeprazole is usually not advised to be taken with heart medicines like digoxin; cilostazol; antifungal medication such as posaconazole and itraconazole; methotrexate; HIV medicines; phenytoin, rifampicin; blood-thinning medicines such as warfarin and clopidogrel; and more, as they can interact with each other and cause harmful side effects.

Similarly, paracetamol does not react with omeprazole, but it does prove to be dangerous if you take additional painkillers containing paracetamol, as this can lead to an overdose. Moreover, it is usually not suitable with warfarin, epilepsy medicine, and tuberculosis medication.

Since they are two, very differently working medication, they hardly ever interact. Hence, it’s completely safe to take omeprazole and paracetamol at the same time. In fact, omeprazole is usually safe to be taken with many other painkillers such as ibuprofen, co-codamol, and naproxen as well.

It is important to be cautious while combining medication, as this can worsen side effects, introduce harmful ones, or even lead to an overdose.

Omeprazole is a medicine that effectively reduces acid levels in the stomach to treat digestive problems. Meanwhile, paracetamol is a painkiller that aims to treat aches and fever.

When it comes to omeprazole and paracetamol, they are perfectly safe to take alongside each other. This is because their functions differ. But this doesn’t ring true for other medications, as they can affect the chemistry and function of omeprazole.

Thus, it is always safe to consult a doctor before taking them, and always follow the doctor’s instructions as to how you can take these medicines.