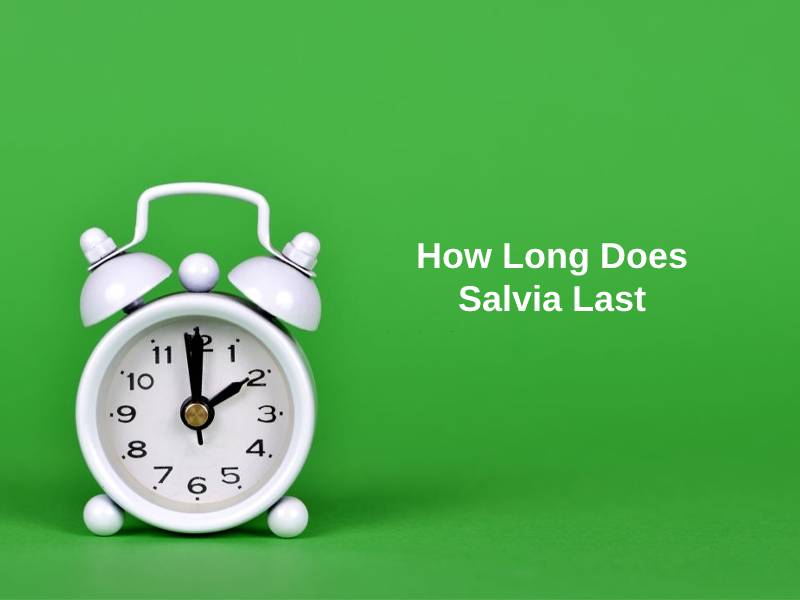 Salvia divinorum, commonly known as Salvia is a super active hallucinogen. While some countries have penalized its use, some are fine with it being legalized. It has an active ingredient named Salvinorin A which is the reason for the responses created against the consumption of this drug. The drug attacks the receptors of the brain and causes hallucinating responses. The drug can be absorbed in various ways.

Salvia belongs to the mint family of herbs. It is majorly found in Central and Southern America, mainly southern Mexico. It is often known as Magic Mint, Diviner’s sage, and Sage of the seer. The after-effects of this drug, along with hallucinations, have been observed as uncontrollable laughter, image-formation, disconnection from the present moment, dizziness, etc.

How Long Does Salvia Last?

Depending upon how salvia is consumed by someone, the time duration of it being in a human’s system varies.

The duration cited above is the usual duration in which hallucinating effects occur. But if the quantity of intake is increased, the drug might stay in the system for long hours, creating hallucinations, temporary dizziness, and disorientation from the surroundings.

The psychoactive effects of this drug include hallucination, disorientation from the stimulus, feeling of detachment from the body, uncomfortable feelings (dysphoria), and being confused in smells and sounds (Synesthesia).

While Salvia is a psychoactive drug, its physical side effects also come into the picture when it is consumed. The physical effects include nausea, feeling of dizziness, decreased heartbeat, disorientation, lack of energy, Slurred speech, chills, heavy sweating, uncontrollable laughter, etc.

Scientists have been studying to know more about this compound but there is less clinical evidence available that speaks of its healing power. It has been understood as a happy drug, which gives the consumer a happy- high trip for a small duration of time with long-lasting physical effects. Sometimes, the over-consumption may lead to health issues and temporary withdrawal of memories, as well.

The long-term effects of Salvia are yet to be studied, but it has been put into light that this drug is not really appropriate to be considered as a good and healing drug.

RECOMMENDED
How Long After Braces can I Eat (And Why)?

Why Does It Last That Long?

Salvia is one of the members of the narcotics family which produces effects like LSD. Some people have believed it to possess spiritual and magical tendencies to heal mental disorders. When it is inhaled or orally taken, the drug compound salvinorin A present in it attacks the opioid receptors of the brain.

When the dried leaves of Salvia are crushed and smoked like a joint, bong, etc., Salvinorin A is vaporized and inhaled. Since it is smoked, the effect is instantaneous but does not last longer than 30 minutes if consumed in a limited amount. The smoker comes back to normal usually in 15-20 minutes.

When these leaves are consumed orally, by chewing, or as a tincture, the effect is longest in the case. The consumption is usually done after an interval of 5 minutes which produces an effect that may cause hallucinations up to 2 hours. When Salvia is consumed as a tea, the effect lies moderately between the above-mentioned modes. The juice of the leaves is mixed with water, which on consuming, deactivates salvinorin A prior to entering the bloodstream in the gastrointestinal tract.

However, it is one of the most common and effective hallucinogens, its psychoactive effects are majorly produced on smoking or when it is taken orally in heavy quantities. The reason behind this is that when it is consumed orally in a limited amount, the gastrointestinal tract has the ability to deactivate Salvinorin A, thus causing the slowing down of the effects.

The addiction to this drug is not found to be risky, as overdoses have not been much reported. But even if a loved one of yours is stuck into this cycle of drug consumption to relieve themselves from a feeling of mental pressure or suffering, it is high time to take a call on the matter. It is recommended to contact a therapist or specialist in this regard to bring them out of this troublesome pattern.