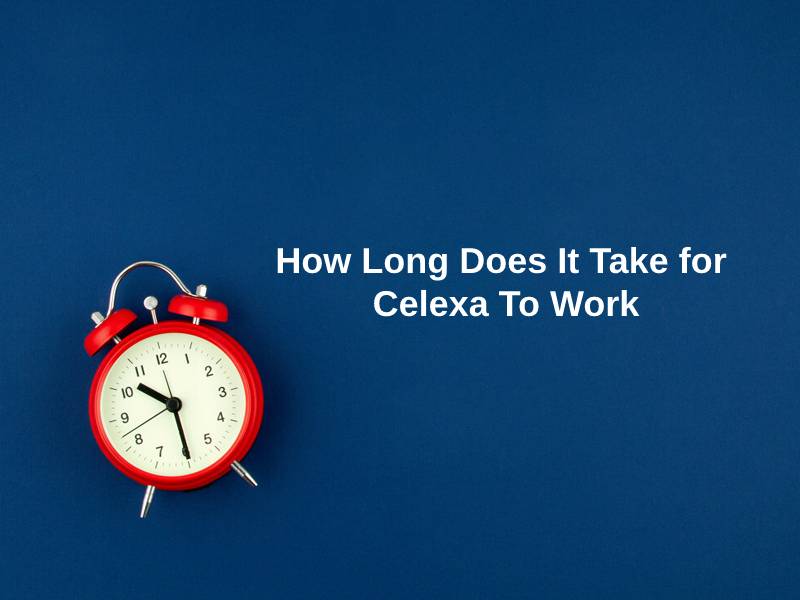 It can be taken for various mental illnesses. And is also used for treating binge eating disorders.

Celexa can be taken by adults and children who are over the age of 12 years and is available on prescription in the form of tablets as well as liquid medicine drops, which have to be put in water and drink.

Celexa is supposed to work by handling the transport level of Serotonin present in the Brain. Serotonin is the chemical responsible for regulating sleep, mood, and other brain functions. This imbalance of chemicals in the brain leads to anxiety and moody behavior.

Celexa controls the levels of serotonin by preventing the nerve cells of the brain from absorbing it. It reduces the rate at which the chemical is absorbed and it eventually helps in improving the mood and reducing anxiety.

How Long Does It Take for Celexa To Work?

In adults, Citalopram is typically taken at a dosage of 20mg per day. It can, however, be started at a lower dose and eventually, as per the guidance of the doctor, be increased to 40 mg per day.

The maximum daily intake is 20mg a day if the person is above 65 years of age or has liver problems.  In children, it is 10mg per day, but can be increased to 40 mg per day, at maximum. For Citalopram liquid, four drops are equivalent to ten milligrams of the medicine.

The reason dosage should be kept low for the elderly, or the people above the age of 65, is that it could potentially lead to QT Prolongation. QT prolongation is a consequence of delayed ventricular repolarisation, which means the heart muscle recharges more slowly than normal between beats.

The dosage of Celexa may also change with people depending upon if they have some other diseases, like, seizures, or low potassium in the blood. The person having Bipolar Disorder may also receive different dosages based on their body.

It can also depend on the history of drug or substance abuse, kidney or liver disease, heart disease, heart failure, or even recent history of a heart attack. The doctor must know about prior diseases to reduce the risk of the medicine harming the body in any way. This may also include a family history of Long QT syndrome.

Why does it take 2 to 6 Weeks for Celexa To Work?

RECOMMENDED
How Long After Wisdom Teeth Can I Smoke - (And Why)?

As we are intaking chemicals for our brain’s functions, it is bound to react with some side effects, some of which include Nausea, Sleep Disturbances, Drowsiness, light-headedness, dry mouth, fatigue, as well as increased sweating.

As we are intaking chemicals for our brain’s functions, it is bound to react with some side effects, some of which include Nausea, Sleep Disturbances, Drowsiness, light-headedness, dry mouth, fatigue, as well as increased sweating.

As we are intaking chemicals for our brain’s functions, it is bound to react with some side effects, some of which include Nausea, Sleep Disturbances, Drowsiness, light-headedness, dry mouth, fatigue, as well as increased sweating. These are the common side effects and are experienced by many people throughout the medication.

However, these can be cured over time, or by external medication. There is also, a category of rare side-effects experienced by people who consume Celexa.

These could include some types of allergic reactions, for instance, rashes, difficulty in breathing, vomiting, seizures, etc. Some people even experience increased amounts of anxiety and even suicidal thoughts.

It is stated that the person should contact their doctor as soon as they feel these side effects as it could lead to serious problems later in the course of medication.

During pregnancy, citalopram can have a small number of risks which can be discussed with the doctors prescribing the medicine.

Celexa is an anti-depressant medication that is also prescribed for a varying number of issues relating to anxiety, depression, eating disorders, stress disorders, etc.

It starts to work within 2 to 6 weeks as the medicine affects the DNA which is responsible for the serotonin transporters, and eventually reduces the amount of serotonin intake by the nerves. That improves mood and reduces the level of anxiety in the brain. It is to be taken in a prescribed amount and only increase the dosage if the doctor suggests the same.

Celexa has several minor side effects which can be controlled by medicines, or with time. However, if the person experiences rare side effects, they must contact the doctor immediately.