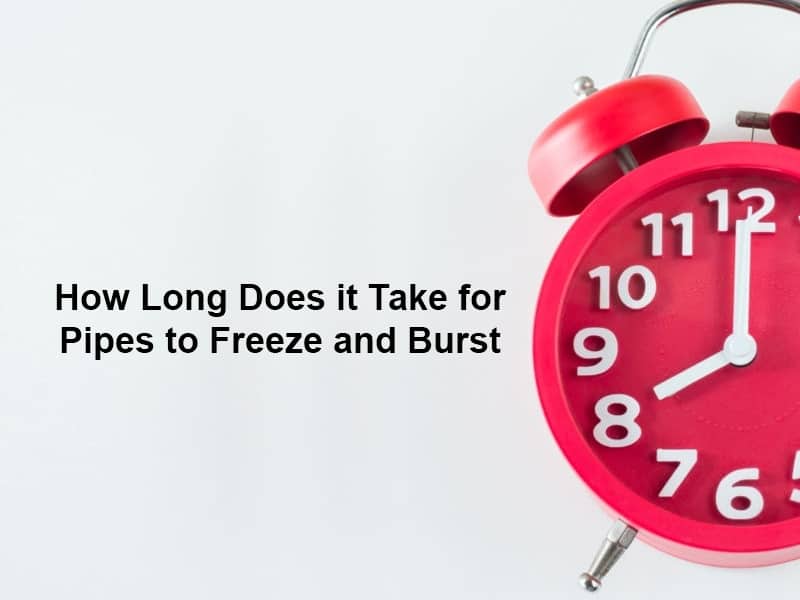 Exact Answer: Up to 6 hours

Winter is just around the corner for many people, and for those areas that are now once again dealing with dropping temperatures, the worry of complications due to the weather is mounting.

One such common worry that most people experience when the temperature begins to drop is that their pipes will freeze and burst, causing flooding and plenty of plumbing damage. Nobody wants to deal with this sort of situation, as it’s usually costly and troublesome to fix.

Also do read about different pipe variants on askanydifference

How Long Does It Take Pipes To Freeze and Burst?

Anytime your pipes freeze, there’s always a chance that they will also burst. This issue is troublesome and even dangerous for most people. This worry increases as the temperature continues to drop, especially with many people planning to go out of town for the holidays.

-Insulated pipes: For pipes that are pretty well insulated, one could expect that their pipes may freeze after 6 hours of no use or heat.

-Poorly insulated pipes: For pipes that have poor or no insulation, freezing risk will become imminent after as little as 3 hours, when in temperatures of 20 and below, without use or access to a heating source.

-Average: The average amount of time it takes for pipes to freeze and then burst in temperatures of 20 degrees and below, without a heating source or use is about 4 to 5 hours or so.

RECOMMENDED
How Long Does a Clutch Last - (And Why)?

It should be noted that not all frozen pipes will burst, though it is extremely likely to happen due to the expansion of water becoming ice in the pipe itself, causing cracks and ultimately busting.

Why Does It Take Pipes So Long To Freeze?

If pipes are left to freeze, it’s understandable that after a certain amount of time, they will also bust. This is due to the growing ice within the pipes, causing cracks in the material and leading to a bust.

This happens because water will begin to freeze at lower temperatures, and when no water is flowing through the pipe due to use, the water is left to sit there, making it easier for the water to freeze inside of the pipe.

To prevent pipes from freezing, try to leave a faucet dripping overnight, or whenever the plumbing won’t be in heavy use. One may also want to heat the home or apartment regularly to avoid the water in the pipes reaching freezing temperatures. If you suspect that your pipes have frozen, call a plumber immediately.