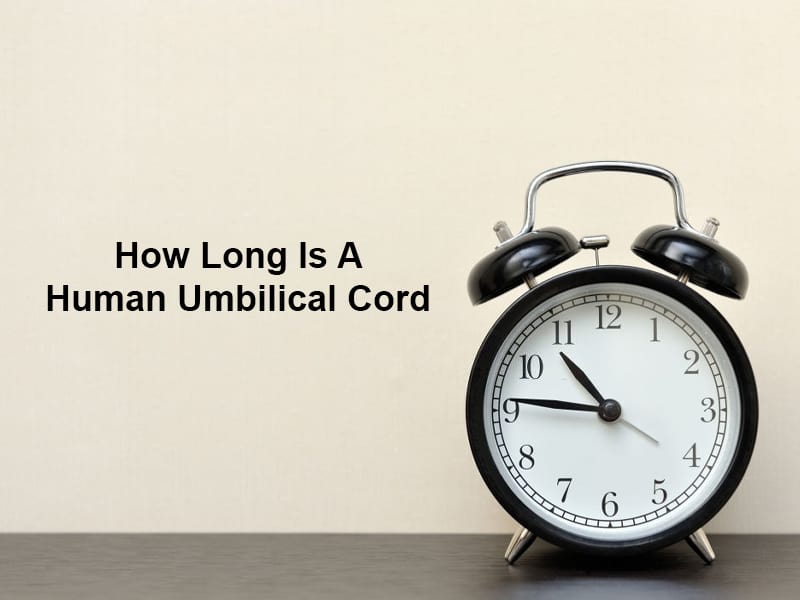 The Umbilical Cord basically consists of three blood vessels. One of the vein called the Umbilical vein is responsible for the transportation of food and oxygen to the baby from the placenta while the remaining two arteries known as Umbilical arteries are helpful in carrying the waste products from the baby to the placenta.

How Long Is A Human Umbilical Cord?

Umbilical cord starts forming at around the beginning of the 2nd month or the 4th week of pregnancy. Umbilical cord conditions generally consists of either the cord being very long or in many cases very short which might result in the cord either not getting well connected to the placenta or sometimes getting knotted or squeezed.

Umbilical Cords that are less than 30 cm in length are considered short and cause a lot of complications such as psychomotor abnormalities, problems in fetal movement, low birth weight, low Apgar scores, etc. The compression of the Umbilical cord can result in the entanglement of the cord or sometimes the umbilical cord gets wrapped around the fetal neck. During the delivery of the baby, short Umbilical Cord often restricts the baby to come out completely and can be very painful for the mother at the time of delivery.

RECOMMENDED
How Long Does Tramadol Stay in Your Urine – (And Why)?

Why Is A Human Umbilical Cord That Long?

The length of the Umbilical Cord is basically dependent on the tension caused by the freely moving fetus, generally during the second trimester. Not only this, the Umbilical Cord also represents the index of fetal activity. The Umbilical Cord helps in connecting the abdomen of the fetus to the placenta, which is further connected to the mother’s uterus. Placenta can be attached to the top, side, front or back side of the Uterus. In rarest of many cases, placenta is sometimes attached in the lower area of the uterus which plays a major role in deciding the length of Umbilical Cord.

As during the prenatal development, the Umbilical cord is a part of the fetus. Hence the Umbilical Cord is generally this long because the cord helps in proper transportation of food and oxygen to the baby. The Umbilical Cord generally contains a fluid which is heavily loaded with stem cells. The fluid is helpful in the treatment of Cancer, Immune System Disorders and Blood Diseases such as Anaemia.

It is very important that the blood that reaches the fetus is pure and free of any impurities or waste products and the Umbilical Cord is also responsible for the transfer of materials to and from the maternal blood without allowing direct mixing. Thus it is important to have a long Umbilical Cord.

Generally, the length of the Umbilical Cord doesn’t vary according to Weight, Length and Sex of the baby. The Umbilical Cord Stump usually dries out and eventually falls off after one to three weeks of delivery.