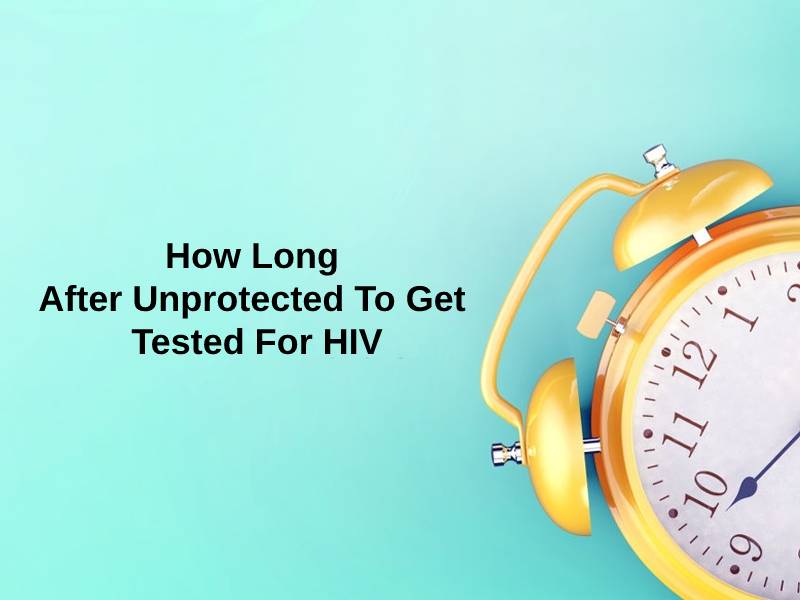 HIV is the abbreviation used to connote the Human Immunodeficiency Virus. It is classed as one of the most notorious STIs. Contracting this virus means that the patient in question can suffer from AIDS or Acquired Immunodeficiency Syndrome. HIV AIDS is a contagious ailment that attacks the immune system of the individual’s body, making it weak against infections and diseases.

The exchange of bloodily fluids like blood, semen, etc. can transmit the virus. Thus, unprotected intercourse has been identified as one of the main avenues through which HIV can be transmitted from one person to another. Therefore, much like other STIs, one must also get tested for HIV.

How Long After Unprotected To Get Tested For HIV?

The protocol with regard to getting tested for the virus is much similar to the process of detecting any other viral infections. Viruses have certain specific incubation periods when they remain dormant in the body of the host. Thus, tests that can identify them must be conducted after this period of dormancy is over.

There are several different kinds of tests that can identify the HIV strain. Home testing kits are among the most common testing tools used by individuals after unprotected intercourse to determine the absence of STIs like HIV. However, the testing period for such tests is quite long. The virus will only be detectable in the home kits after 3 months of the initial exposure.

The Rapid Antibody Test can be conducted within a period of 3 to 12 weeks after having unprotected sex. The viral strain will be identified through this test within this window of time. This testing mechanism provides a more or less median time frame as compared to the other testing modalities for HIV.

There is another testing mechanism that allows the virus to be detected within a period of merely 2 weeks after the individual has unprotected intercourse. This test is known as the Rapid Antigen Test. Sometimes it is also called a Combination Test. However, such a mode of examination can only be followed under the guidance of a medical examiner in a lab.

A Nucleic Acid Test can also be ordered by the doctor if he or she is quite certain that the person in question has the viral pathogen. Such a test can be taken within a week or two after exposure to the virus.

Why Do Have To Wait This Long After Unprotected To Get Tested For HIV?

There is a variable time frame of assessment for the infection because it is caused by a viral pathogen. Viruses cannot always be detected when the individual is first exposed to them. It is only after they become active in the body that their presence can be successfully detected.

RECOMMENDED
How Long After Angioplasty Can I Exercise (And Why)?

Thus, different tests can pick up the HIV strain under different time frames. Each of these tests interrogates the presence or absence of the HIV strain in a different way. This helps them ascertain whether the patient is positive or negative.

The Nucleic Acid Test (NAT) studies the amount of virus in the blood sample provided to the lab. This viral load is then used to determine whether the patient is deemed to be positive or negative. This means that the virus has to be given at least a week or two to activate itself in the host’s body to increase the viral load to a point where it’s detectable through a NAT procedure.

Similarly, the combination test detects the antigens and antibodies produced by the immune system of the individual against the virus. This is visible only after 2 weeks of the initial exposure. Double testing is done from 2 to 6 weeks of unprotected intercourse to ensure the absence of HIV. The Rapid Antibody Test also functions in a similar way. Within 3 to 12 weeks of exposure, there are enough antibodies produced by the patient to be detectable through screening.

The home kits that detect the HIV strain use an oral fluid sample to do so. Again a 3 month period is mentioned because by this time the virus has spread to all bodily fluids and can be detected through the oral fluid on the home kit.

HIV is a contagious viral pathogen that is primarily spread through unprotected intercourse, contaminated blood transfusions, and needles. In the absence of protection during sex, the virus can be transmitted from the infected individual to the healthy person.

The testing period for the virus lies between 10 days to 3 months, depending on the kind of test used to detect it. The key is to consult a medical professional after unprotected sex. He or she will be able to advise you on the best course of preventing an HIV infection and also notify you about the exact testing method that has to be used to detect the strain.