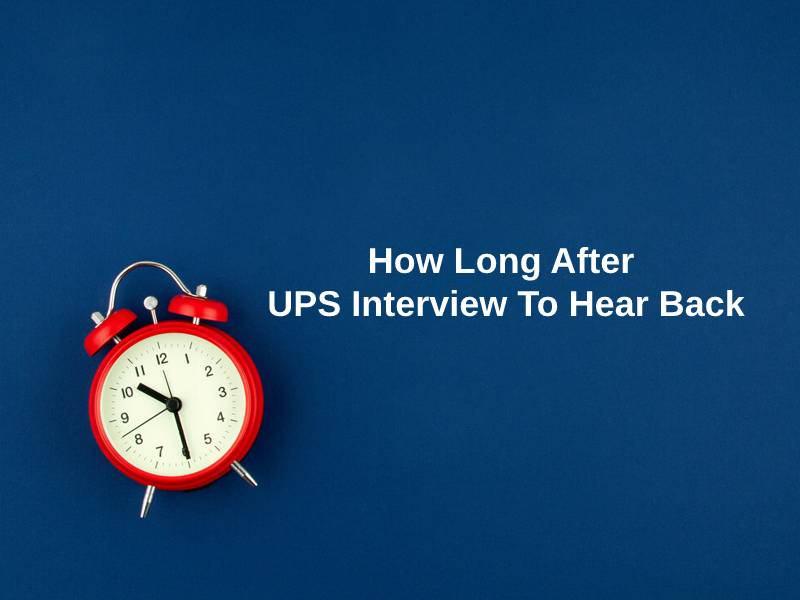 UPS is an abbreviation used to connote the Georgia-based United Parcel Service. It is a nationwide courier chain in charge of shipping, packaging, and delivering parcels in America. The brand name is stylized to represent its subsidiaries like the cargo airlines called UPS Airline.

Similarly, the UPS system also has other subsidiaries like its reputed freight delivery system and the drone delivery airline, which aid in running the UPS courier network. Much like all other companies in the industry, the process of hiring personnel in the UPS network is quite complicated and thorough. The multitier process of assessment takes some time to be completed and for the final results to be made known to the applicants.

How Long After UPS Interview To Hear Back?

United Parcel Service or UPS has a multi-dimensional process of hiring that it follows quite stringently in all its subsidiary arenas of operation. The positions open at the chain are variegated and getting into the established network of personnel at the chain is quite difficult.

However, UPS is known to reveal its vacancy list of positions right around the holiday season as this is the time of excess demands with people sending and receiving parcels. The company is known to promote from within. Thus, the only way to get into the chain would be to accept the position of a parcel handler.

There are four sections of the UPS recruitment process. After the process of online application for the vacant positions, one has to patiently wait for an interview call. After the interview is over, the individual waits for the final affirmation on whether he or she has been accepted for the open position. This is the real waiting game.

In the case of certain lucky individuals, the hiring takes place on spot. After the interview is over, the supervisor who conducted the interview is impressed with the interviewee’s credibility and capabilities. This leads to the individual being hired immediately. Such instances, however, are quite a rarity.

Similarly, there are others who have also received the affirmative call just a few minutes or hours after their interviews. However, on average, the interviewee has to wait for at least 2 weeks before hearing back from UPS after the interview. This is the most common experience.

Why Does It Take This Long After UPS Interview To Hear Back?

The common rule of thumb with any UPS appointment opportunity is that an individual is usually contacted within a period of one month if they are seriously being considered for the open position. If you happen to not hear from the HR representatives of the chain within this period, it would be prudent to apply for other jobs.

RECOMMENDED
How Long Does it Take to Get Approved for an Apartment in USA - (And Why)?

It is quite rare for an individual to get a positive response from the chain after the lapse of the initial month after the interview. On only the very rarest of occasions, the UPS chain will contact the interviewee if there happens to be a glitch in the system or the appointment letter of the individual was somehow misplaced.

The usual 2 weeks delay is quite expected because the UPS chain handles a mammoth volume of applications during the holiday seasons when its listings are made public. Sifting through thousands of such applications is a lengthy process.

Moreover, at the interview, the supervisor will verify the applicant’s social security and other documents to establish his credibility as an interviewee. This too is time-consuming. Similarly, the chain also conducts background checks on its personnel before hiring them. Thus, the entire process of establishing the eligibility of the interviewee takes time.

When the documents of the individual applying for the job are in order and the background is essentially clean, it is possible to get appointed soon after the interview. But again the individual must impress his or her supervisor beyond any doubt during the interview to secure this feat.

The hiring procedure at UPS is quite detail-oriented. Thus, getting to a final shortlist of candidates is usually a tedious and excruciatingly long process. The esteemed US-based courier service network still attempts to streamline hiring at all levels of its operations.

The general norm is that an individual applying for a job at the UPS courier network hears back from the supervisor within 2 weeks. However, sometimes individuals also get hired immediately after their interview is completed. The maximum waiting period for a call back from the chain after the interview is a month. In cases where the applicant is being considered for the position after the interview, he or she will be contacted within this time frame.