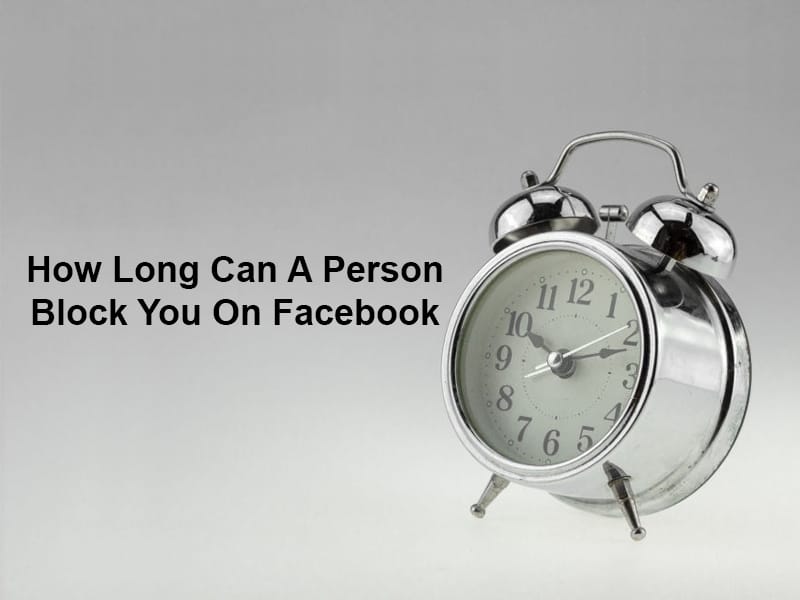 On Facebook, anyone can block any person. The person who gets blocked cannot send any message, see the posts or even the profile of the person who blocked them. People generally block the user with whom they don’t want to interact anymore.

The block feature can be used on everyone on Facebook, whether they are friends or not. If one blocks their Facebook friend, the person automatically gets unfriended as well. When the person is removed from the block list, they need to send a friend request once again to be friends with the other person.

How Long Can A Person Block You On Facebook?

A person can block another person on Facebook for several reasons. It could be just for fun and it could be very serious as well. Anyways, as it is a feature used for privacy, which is very important in current time. Hence it is taken very seriously.

So, this feature in Facebook is permanent and stays forever. There is no time limit for a person to get unblocked automatically. If one person blocks another person, they will be blocked forever. The person can get unblocked only when the first person removes them from the blocklist of their Facebook account.

Although, to prevent such serious feature to be used for ‘fun purposes’, Facebook also has a 48-hour rule. If a person blocks someone, unblocks them instantly and tries to block them again, they will have to wait for 48 hours to block the person again. This feature is to prevent unfair use of block profile feature. As an alternative to this feature, Facebook has also introduced the Snooze feature, where one can not see the activity of another person for 30 days. While there is another feature as the Limited Friend list on Facebook. In this feature, the person who is added will see only a limited portion of the first person’s profile.

Why Can Someone Block You That Long On Facebook?

Social media is a place where anyone can interact with anyone. Only Facebook alone has billions of users. This creates a major risk to an individual’s privacy. So, to make everyone feel safe on social media, this feature is permanent. Unless a person does not want someone to see their profile, or interact with them, they can keep them on the blocklist without any fear of being contacted automatically.

RECOMMENDED
How Long Does it Take to Backup iPhone – (And Why)?

Every other day we hear about and see several harassing acts around social media. So, such features are important to avoid any kind of harassment on social media. This is not it, this feature also helps in maintaining discipline on Facebook. A person can be blocked permanently not only by an individual but by a group as well. This feature can be used only by the admin of a group and can also be reverted by the admin as well.

To ensure discipline and security, such features are made permanent. Yet they are not irreversible and can be undone anytime by the user’s wish. This is to reduce blocking someone by mistake or to let someone interact with the person when they are ready to give the consent. Moreover, with this feature, no third person needs to be indulged in the process. One user blocks another user till they want to.

Real-life or social media, a person’s consent, security and privacy is a serious matter and should not be ignored at any cost. To ensure safety, Facebook has its block feature as a permanent feature and cannot be undone unless the user themselves give their consent for it.

This ensures the safety and helps in maintaining discipline among the Facebook community without having a third person indulged in the matter. The feature is safe to use and can be used by anyone on Facebook to keep away anyone they want to. As it has no expiring time period, much more freedom to the user and user can browse Facebook with lesser worries.