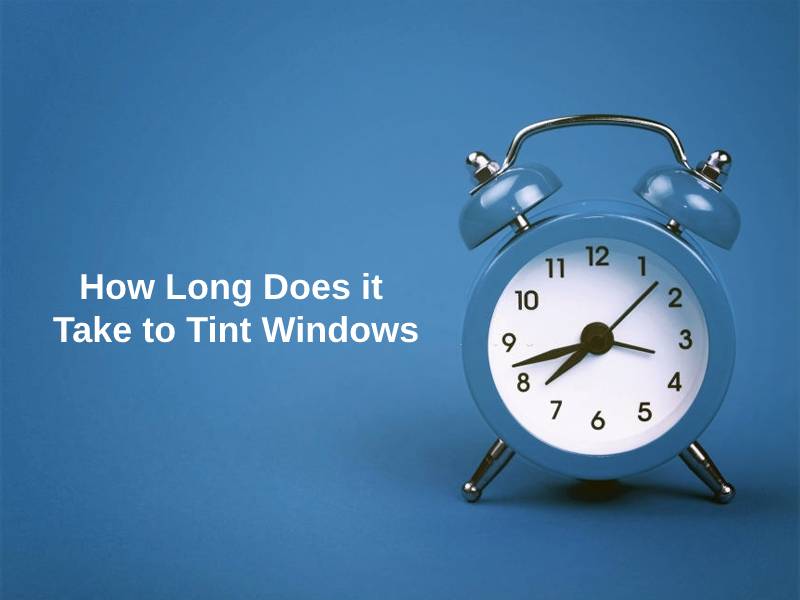 Window tinting is a process primarily done to reduce the heat and radiation caused by the sun. Window tinting is primarily done on automobiles like cars. They are also done on windows in buildings. Tinting is sometimes done as a way for better privacy.
In the daytime, anybody with a tinted window can see what’s going on outside. Whereas, someone from outside cannot see through the window. This can backfire on the user because at night when the automobile or house is illuminated from inside, Anyone outside can see through the window.
Since window tinting blocks out about 78% of the sun’s heat and radiation, people all over the world prefer them.

How Long Does it Take to Tint Windows?

Tinting is done for various types. These include;

The automobile industry has a greater number of people tinting the vehicle’s windows. The expected time for completion of window tinting is about 2 hours. At first, they precisely place the film to the contour of the window. Then they create a clean surface for the application of the film. After that, they place the required film on the window

The process of window tinting Residential homes are a bit difficult than automobile window tinting. This is because it takes approximately 1 – 2 working days for the completion of tinting. In Residential windows, they clean and prepare the windows for adhesion. After which they measure the window inside out for proper cutting. Then they move on to protect any furniture or valuable item nearby the window. Finally, they apply the tinted film to the window. The complete process takes a few hours for the completion of a single window.

The process done in tinting is similar to that of tinting residential windows. But this process is a lot of time-consuming as compared to residential windows. This is because in most cases commercial buildings have a greater number of windows. These are also larger than residential buildings.
Since this process takes up a lot of time, they hire professionals with a greater amount of manpower to complete the tasks quickly and accurately. They also use high-grade films with a good NFRC score than films used in residential homes.

Why Does it Take Long to Tint Windows?

The tinting of a window is a time-consuming factor. This is because a minor mistake could even damage the longevity of the tinted film. The formation of air bubbles is the main reason for damage faced by the film. A damaged film is really difficult to maintain.
The film can also get damaged by various other factors. These include natural and technical faults.
Natural Fault
This is caused by Mother Nature herself. Because of the seasonal changes, the film has to undergo, the longevity decreases.
Technical Fault
These faults happen because of the carelessness of the applier. The probable causes that could happen are the formation of air bubbles but these can be fixed by squeezing out the bubbles that pop up.

RECOMMENDED
How Long After Clear Coat Can I Drive (And Why)?

Taking long hours in applying the tinted film ensures that the work is done as professionally as possible. Also, after application, it takes a few hours for truly merging with the windows. The setting time ensures that the film functions the way it’s supposed to. The setting time varies with different types of film, like;
Even though the film can be applied within 2 hours, automobile window tinding requires a minimum of 24 hours of a cool-down period. Until that period, the car windows should not be pulled down.
Residential homes and commercial buildings require a collective cool-down period of about 3 – 30 days. This is because of the greater number of windows and the area of the windows.
It is also to be noted that no air bubble should be trapped inside the film while placing them in the windows.

The tinting of windows is not as simple as it looks. The work involved looks simple but the technical skill required to pull off such a delicate task requires expert craftsmanship. Only someone so accurate can do this task.
Tinting is also beneficial for many people in so many ways. The main reason being cooling vehicles and buildings from direct sunlight. These benefits are being slept upon by many people because of a lack of awareness. Even though automobile window tinting is said to be illegal in some countries, their laws allow the citizens to apply films that allow passage of 80% sunlight.
Even though tinting takes a few hours of one’s time. The purpose used for tinting exceeds the time spend on it.