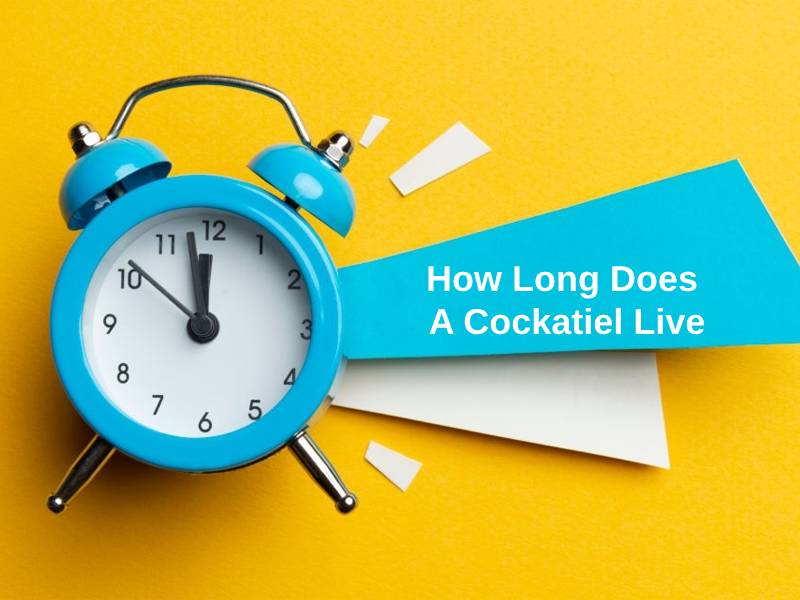 Found in Australia, a cockatiel is a small parrot with a crested head and a colourful appearance. They make popular pets as they are friendly creatures and easy to breed in captivity.

Young cockatiels are easily tamable and bond quickly with humans but a parent-reared one may take a longer time to train. Cockatiels are affectionate birds who like being touched and held. They have a mellow nature and make great companions.

Cockatiels are a great choice for a pet as they live a long life in captivity. They are intelligent little birds with a flair for learning tricks to keep you entertained. They easily learn whistling, waving and bell ringing.

How Long Does A Cockatiel Live?

Cockatiels are also known as quarrions or weirs in their native Australia. They primarily belong to the semi-arid regions of the northern part of the continent. Being the smallest members of the cockatoo family, they exhibit similar physical features and behavior. Discovered in the 1770s, the wild cockatiels live in large flocks.

Cockatiels commonly live up to 10-14 years in the wild. They have a better life expectancy when captivated and easily make it longer than 15 years. Proper nutrition and exercise may increase a captive cockatiel’s life span. Under adequate care, domesticated cockatiels may live up to 20 to 25 years. Cockatiels have reported living as long as 32 years. The longest living specimen was confirmed to have died at 36.

The pure cockatiel is grey-coloured with a bright yellow face and a crested head. Having been bred in captivity, they have developed several mutations over time. Genetically, the grey cockatiel is the strongest with the longest life span. However, mutated and inbred cockatiels live shorter, often dying at the age of 12. A male cockatiel starts breeding at 12 to 15 months while female ones mature at about 18 months.

Pet cockatiels become prone to diseases when kept in crowded places which leads to a shorter life expectancy. A proper diet, plenty of exercise, and a healthy amount of socialization with the owner contribute to longer life spans.

Why Does A Cockatiel Live This Long?

Wild cockatiels comparatively have a shorter life expectancy than that of captivated cockatiels. This is because survival in the wild is pretty difficult for a cockatiel. They often have to live in harsh habitats with constant risks of harm. Several flocks live nomadic lives in search of food and water for survival, which is often hard to find. Though cockatiels have many strengths, including their abilities to fly and camouflage, they cannot defend themselves against predators like raptors.

RECOMMENDED
How Long do Cockatiels Live – (And Why)?

If lucky, a cockatiel may survive 10 to 14 years in the wild. However, in captivity, cockatiels live a longer, healthier life of about 20 to 25 years. The most fundamental way to ensure a pet cockatiel lives a long life is proper nutrition and care.

Veterinarians claim that a majority of premature cockatiel deaths occur due to nutritional deficiencies. It is necessary to maintain a cockatiel’s diet with all the right nutrients to ensure maximum life expectancy. Essentially, a cockatiel’s diet should include fruits, berries, grasses and some seeds. They should also have lean protein and whole grains in their diet.

A diet primarily consisting of pelleted food along with a healthy portion of fruits and vegetables should be enough to maintain proper nutrition.

Cockatiels work well in pairs but often may not bond with their owner and mimic sounds. Meanwhile, a single bird requires a significant amount of time and attention from its owner to avoid getting lonely. Cockatiels are friendly and sociable birds and need regular interaction with their owner to remain content.

Cockatiels require enriching lifestyles to stay healthy and jovial for a long time. A suitable cage with perches and toys provides mental stimulation and prevents the bird from getting bored.

A dull environment could make a cockatiel gloomy and lonely. It becomes less active and stops eating – leading to a variety of illnesses that eventually cause death.

Cockatiels are an excellent choice for those looking to domesticate a parrot. They learn how to talk and mimic sounds but are not as loud as other parrots. They are tiny, fit in small homes and do not need a lot of time outside their cage. When treated with affection and care, they form strong bonds with humans.

Cockatiels make affectionate pets but need to be trained well, or they might nip. Though gentle with their owner, they may not be as fond if housed with another cockatiel.

Though cockatiels are easy to train and maintain while being affordable, they require proper supervision and a healthy environment to grow and live longer.