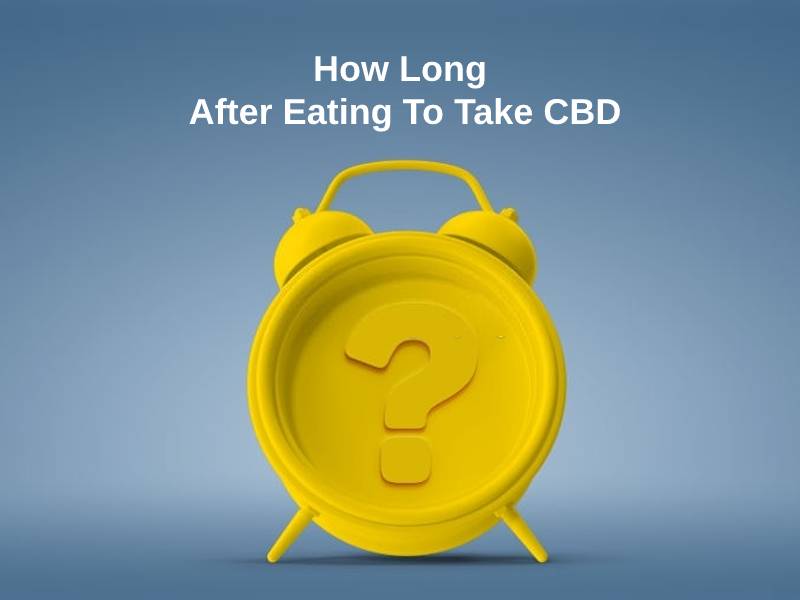 Exact Answer: With Food Or Immediately After Eating

CBD stands for Cannabidiol. It is a type of chemical found in the drug known as marijuana. It is commonly used as an anti-seizure medicine.

There are many products online which contain CBD oil which is in the form of food products, drinks, etc. It is also present in beauty products. It is used to treat two kinds of epilepsies. It is also used as a medication for Anxiety, Parkinson’s disease, diabetes, alongside many others.

Some people use Cannabidiol for neurological disorders but there has been no concrete evidence as such to support the claims of it working as a medicine for those.

How Long After Eating To Take CBD?

Most people believe that CBD should be taken with food to maximize absorption into the body. There is also a part that suggests that a meal that has high levels of fat would make CBD absorb more into the body as compared to a meal that is lower in fat.

CBD is mostly used for sleep, anxiety, or treating and managing pain for athletes. Most CBD products would have instructions as to how the oil should be taken, and some of them suggest mixing it with the food for maximum absorption.

The CBD Oil should never be taken on an empty stomach, always it should be taken when the person has eaten something or taking it while eating food. The reason for taking CBD during or after eating is that while the food in our stomach is being digested, at that time is the highest quantity of absorption of the CBD oil.

It could be taken on an empty stomach but looking at the optimal values, it would just be a waste of product as it would not get absorbed as much as it would when taken on a full stomach.

Another way to increase the quantity of CBD absorbed into the body is to eat fatty food while taking the oil. Fatty food could include eggs, avocados, nuts, etc. Further, the best method of taking CBD oil is suggested to be with the tongue, or also called sublingual dosing. It refers to the process of letting your body absorb the drug by putting it on your tongue, the tissues on the tongue then absorb the substance to the body.

Why Take CBD With Food Or Immediately After Eating?

The reason for suggesting to take CBD during eating or immediately after is that the absorption capacity is at maximum at that time and no product would be wasted. If taken on an empty stomach, the drug would be wasted away as the body would not absorb it to its full capacity at that time.

RECOMMENDED
How Long Does Balsamic Vinegar Last – (And Why)?

However, when the person has eaten something or the stomach is full, the CBD would be digested alongside the food into the body and would be absorbed to its highest capacities.

There is another way to increase the absorption capacity of the drug, and that is by eating food that is rich in fat while taking CBD oil. The reason for this is that fatty food would help the body bind CBD to other food supplements in the body and help it absorb more of the substance.

The food items that could be eaten to increase the absorption capabilities of the drug are eggs, fish, nuts, etc. Avocados are also a good way to increase fat in the meal.

Further, CBD is suggested to be taken by a method called “Sublingual Dosing”, which is putting the drug on your tongue and letting the tissues there absorb it. It is suggested that this method has the highest absorption rates of the drug and a minimal amount of it goes to waste. It should be placed under the tongue for about 60 to 90 seconds and then be swallowed.

This way is proved to be faster, easier and the wastage of the substance would be minimal.

CBD stands for Cannabidiol, it is a common type of anti-seizure medicine. It is available in the form of many food products and drinks in the market and is also present in beauty products. It is suggested that CBD should be taken either with food or immediately after it to maximize the absorption capacities of the substance. The reason for it is that while taking CBD on a full stomach, it would be digested alongside the food and would be absorbed in its fullest in the body. It is suggested that it should be taken by putting it under the tongue for about 60 to 90 seconds and then swallowed as the tissues on the tongue would absorb it into the body and there would be minimal wastage.