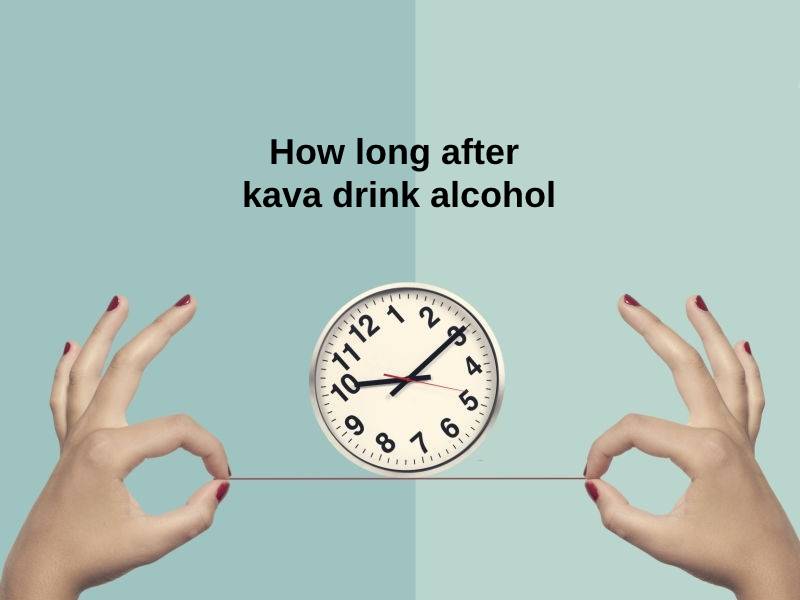 Kava is a liquor or extracts derived from the herb Piper methysticum, which is endemic to the western Pacific islands. “Kava” is derived from the Polynesian word “awa,” which means “bitter.” Kava, like alcohol in Western cultures, is a traditional social drink in the South Pacific. In rituals, it is drunk as a cocktail to facilitate healing. Kava affects the hippocampus and other areas of the nervous system.

Kava’s symptoms are said to be caused by the kava-lactones. Kava is widely used to treat anxiety. Some people use kava to treat fatigue, restlessness, sleeping disorders (insomnia), and a variety of other ailments. However, there is no solid statistical evidence to back up these claims. It is suggested that there must be a minimum of 24 hours or even more for intake of alcohol after taking kava.

How Long After Kava to Drink Alcohol?

The time between the two, kava and alcohol is based on the time taken by each to leave the system.

Traditionally, if any substance or drug collides with any other drug intake then the time that is taken to leave the body system must be considered. In the same way, kava takes two to twenty-four hours to leave the system, which implies that alcohol can be taken only after a minimum of one day. As kava is used according to the time period prescribed by the physician or doctor, the patient must not take kava at least for a minimum of one day after intake of alcohol.

It is generally recommended that at least 24 hours pass between the two, but this will vary based on the doses of each drug and the patient’s state of health. It’s not unusual for people to drink a beer or something after drinking kava in kava-drinking countries. It doesn’t mean it’s healthy because there’s no way to tell how much or how little harm it’s causing, but it does happen, and it’s obviously not a death sentence.

To be on the safe side and optimize the satisfaction of any encounter, a 72-hour window is a reasonable rule of thumb. If you’re going to drink, skip the kava for three days and then wait three days after the alcohol to start drinking again. Sure, you can get away with fewer, but this is the best bet.

Why Does it Take That Long to Drink Alcohol After Kava?

Liver problems can occur from Kava-containing products and mixing them with alcohol can make it worse. Furthermore, alcohol can amplify different side effects to the central nervous system, such as dizziness and drowsiness. When being handled with kava, you should refrain from or restrict the consumption of alcohol. Many people like drinking kava to the polar opposite of drinking coffee. Both are used as shared beverages. While the latter can have a slight buzz and “kick” of electricity, the former is known for its gentle soothing, and healing properties.

RECOMMENDED
How Long After Buying KFC Can You Eat It (And Why)?

When the balance isn’t quite correct, the subject enjoys a positive state of unconcern, well-being, and contentment that is devoid of physical or psychological excitement. Coverage begins in a soft, quick rhythm, and hearing and sight are honed, becoming capable of perceiving delicate shades of sound and vision. Kava has a calming effect on the mind. As alcohol causes, the drinker never becomes furious, nasty, quarrelsome, or disruptive. Kava is used by both natives and whites to relieve spiritual pain. The drinker retains control of his guilt and purpose. However, when eating is excessive, the limbs become exhausted, and the muscles seem to no longer respond to commands and control of the body.

The results of kava are determined by factors such as cultivar form and weight, as well as the preparation process. Kava is well-known for its sedative properties and ability to promote sociability and a sense of unity without impairing mental clarity or memory. Kava is a fun, mildly relaxing drink that relieves exhaustion, relaxes the body after hard work or effort, clarifies the mind, and provides a feeling of well-being for many consumers.

Kava, unlike alcohol, encourages harmony, cooperation, and tranquillity. It has no negative effects on your mental clarity or awareness and will help you focus or resolve mental confusion induced by anxiety or stress. When consumed in large amounts, kava will impair your balance and cause you to become extremely sleepy. It would not make you aggressive or reckless about your own decisions, unlike alcohol. Finally, noble kava roots would not leave you with a hangover. Knowing the pros and cons of a drug before the intake is necessary. While drug usage, it is suggested to stay away from specific opposite reaction drugs or food.