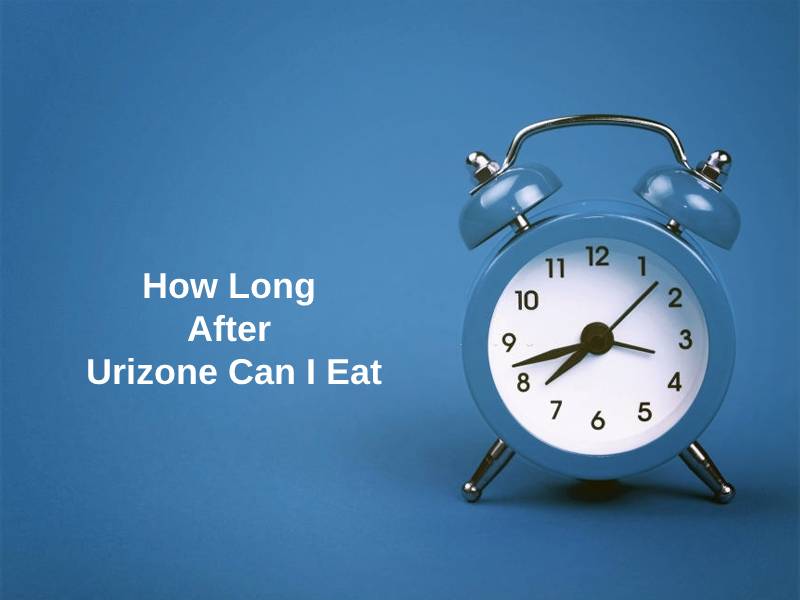 Exact Answer: At least after 2 hours

Fosfomycin trometamol is the active ingredient used in Urizone. This is the main chemical that helps assuage the burning sensation and other symptoms of a UTI in the patient. There are other minor ingredients added to the mix, including saccharin and flavors, but Fosfomycin remains the central, active agent in the drug.

How Long After Urizone Can I Eat?

Medications often have reactions with several other components of the patient’s consumption routine. Most medicine manufacturers list the possible interactions the drug can have with the food or drinks consumed by the patient. Moreover, the dosage timings are also specified so as to avoid any unwanted interactions. The patient must follow these time frames to avoid harmful reactions.

Urizone also mandates certain guidelines vis-à-vis the consumption of food before and after the intake of the medicine. The general norm is that Urizone can be consumed an hour after eating. The drug is packaged in a sachet. Urizone is an oral medication that is available in a powdered form. This powder must be mixed with water and consumed immediately after it dissolves.

However, once the drug has been consumed, the patient cannot eat for another 2 hours. This 2-hour window is not necessarily flexible. Patients are absolutely refrained from consuming anything during this period. After this minimum time frame has passed, the patient is allowed to eat his or her next meal.

The thumb rule for any medicine, including Urizone, is to get a valid prescription from a physician for the dosage and compatibility of use. Doctors suggest medications after assessing the health of the patient holistically. If the doctor feels that Urizone is not a good fit, given the patient’s history or pre-existing conditions, then it would be harmful to consume the drug without his approval.

Similarly, the eating schedule may also be altered by the physician upon analysis. It is thus, always judicious to consult a doctor before self-medicating.

Why Do You Have To Wait So Long Before Eating After Urizone?

The chemical composition of a drug determines the precautionary guidelines listed with the medication. In the case of Urizone, the main active agent is Fosfomycin. This ingredient is known to change its effectiveness when mixed with food.

RECOMMENDED
How Long After Vaccines Will Baby be Protected (And Why)?

Doctors have stated that the consumption of food right after taking Urizone alters the absorption rate of the drug. This simply indicates that it will take longer for the chemicals in the drug to be absorbed by the body and actually show results. In other words, your UTI will not show signs of improvement unless the 2-hour guideline of avoiding food consumption is diligently followed.

Similarly, it is also recommended to avoid food right after the drug is ingested because the chemicals in the medicine may interact unfavorably with the components of the food you have consumed. This may cause serious health issues and may also aggravate the UTI instead of healing it.

To avoid such interactions, your system must be given enough time to process and absorb the drug before it is filled with food and drinks. Food slows down the breakdown process of Fosfomycin, thus, resulting in a much slower progression of the drug’s digestion and absorption.

A review of cases suggests that patients who had ingested food right before taking the drug reported that their UTIs had remained unchanged or worsened. In some cases, the patient consumed food right after Urizone. This too had the same impact. The UTI and its symptoms remained unchanged. Consulting a medical professional on correct dosage timings and food consumption patterns when on medication is always judicious than opting for the path of self-medication.

Urizone is a well-known prescription drug that is used to correct the problems of UTI and bladder infections in both men and women. The drug, like most other medications, has certain side effects. There are also certain precautionary protocols that need to be followed when consuming Urizone.

The most important point to cognize is that the patient cannot consume food after the intake of the drug for at least 2 hours. This window of time must be diligently maintained to avoid any unwarranted interactions and health complications. Moreover, it is advisable that the patient must refer to a doctor before consuming Urizone to get the best-suited treatment for his or her UTI.