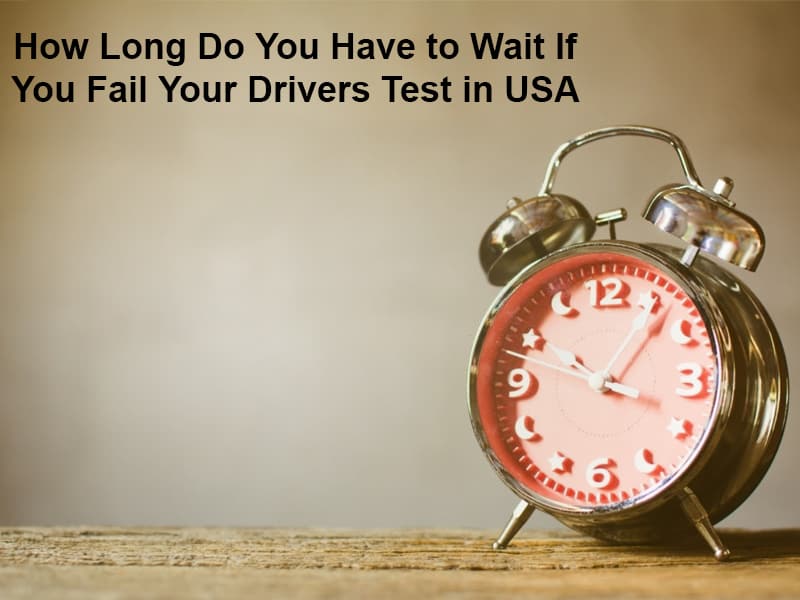 Taking a driver’s test can be a nerve-wracking experience for any new driver, especially when they want their license as soon as possible.

The way that these tests are scored is divided into two categories: the pre-drive checklist (where you are supposed to adjust seating position and mirrors) and the driving portion of the test (where the instructor will ride with you and list every error that you make.

How Long Do You Have to Wait if You Fail a Driver’s Test?

With all of these things in mind, it is no wonder that the prospect of failing their driving test makes many people slightly nervous. If you do happen to fail your driver’s test there is a mandatory waiting period that does nothing but add onto this nervousness.

If you do happen to fail your drivers test there are a few steps you have to go through that increase the time you must wait before trying again.

The first time that you fail you have to wait at least two weeks before you are able to take the test again, and when you do there is a fee. Generally, this fee is around seven dollars but it really depends where you are living.

If you fail the test on your second attempt as well then the same conditions are applied, the mandatory two week waiting period along with the seven dollar testing fee (or whatever the fee is in your area).

RECOMMENDED
How Long Can a Person be Out on Bond (And Why)?

However, if you fail the test on your third attempt as well then the punishment is a bit more of a hassle. In addition to needing to wait to retest you also must begin the entire process over, including starting over your driving lessons.

Why Do You Have to Wait This Long?

The reason that these strict waiting periods are put in place is that they were created in order to try and increase safety and cut down the number of motor accidents that occur. Mostly because it removes the possibility of having inexperienced drivers on the road.

By having people wait for the initial two weeks between testing periods for every failure to pass, it is hoped that they will take that time period in order to practice more for the next test. This allows them to be more prepared for the test the next time and also have better driving skills for when they do manage to successfully get their license.

As for having to redo entirely the licensing process, this is because they decided that if you are still not able to pass your drivers test after so many attempts then you must need a lot more practice both book-wise (what you have to study in order to obtain a learners permit) and for driving in general.