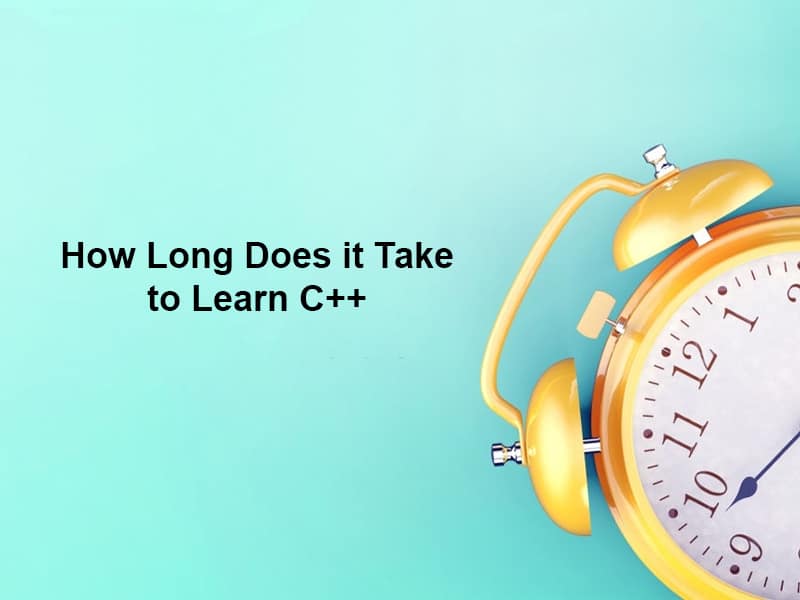 C++ is the most used programming language out there. The use of C++ is in major operating systems like Windows, well-known games and platforms like World of Warcraft and Android games, and graphic user interface applications like Photoshop.

As are all languages out there, it will take a while to learn, but it would all be worth it in the long run, whether someone wants a job in IT gaming or learning for fun.

Compared with all the other programming languages out there such as Java, a more versatile language, how long will it take for someone to learn it?

How Long Does it Take to Learn C++?

Few Months to a Year in Addition to Updates with C++.

It depends on if you know another programming language. Knowing a language like Java and Python will help a lot when learning this language.

Learning the basics won’t take too long, taking about 2-3 weeks. Learning C++, it will take you this long when you are concentrating only on functional C++, like input and output, and exclude objects, classes, and file operations.

This is when an individual is taking the time to learn it 2-4 hours a day and five days per week. For absolute beginners, it will take 2-3 months to learn the basics on average.

It takes a lot longer going forward with more complex programming problems and understanding the language in more intricate ways, which takes about 6-12 months.

Considering that C++ is being updated often, there isn’t a time where someone would be able to “master” the language. Once you understand the nuances in the language, it will be updated once again.

RECOMMENDED
How Long Does it Take to Get a Student Loan in the USA - (And Why)?

There will be a need to learn more about the C++ language. Another factor of how long it will take for someone to learn the language is how fast a learner they are. It could take as long as an hour for a fast learner who already knew other languages.

Why Does it Take This Long to Learn C++?

It’s Complicated to Give A Programmer More Freedom

C++ is a complicated language that isn’t recommended to beginners of programming since other programs are like the tip of the iceberg compared to C++. Most other programs are designed to be easier to code to quicken the process and to get it to work.

This language has different goals in mind. It focuses on trying to compact speed and memory in its design. In addition to C++ having to be compatible with the programming language of C.

While including compatibility with C, it built onto it, adding call-to-reference, built-in strings along with another advanced level programming to make it more complicated than the more simple C.

Another factor of the time it takes to learn this language is the fact that it gives more freedom and functions to go from but not any hints built into the program to figure out what’s gone wrong.

It will take patience to figure out the ways to find the problems and to solve them. There is a bunch of coding that isn’t understandable the first time, and learning all the exceptions to some rules would take some time.

It’s a language that a person would need to build on and figure out the best way for them to use C++.