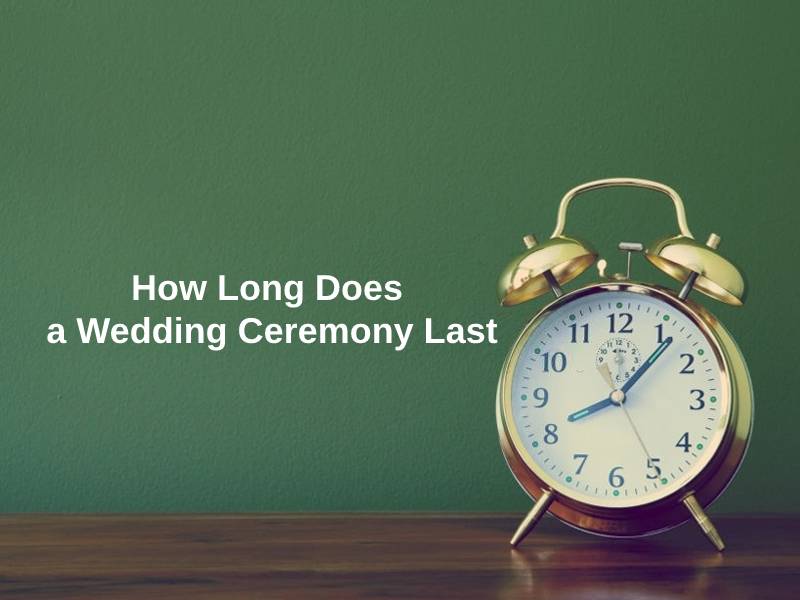 Wedding ceremonies symbolize the act of uniting the bride and groom in the ties of holy matrimony. The specific traditions involved in a particular wedding ceremony will be dependent on the religious, cultural, and familial diktats of a given social order. Thus, the duration of certain wedding ceremonies is longer than others.

Wedding ceremonies consist of various rituals and rites that signify the union of the couple. During the wedding ceremony, the couple may exchange vows, gifts, rings, etc. as symbols of their eternal commitment to each other. These ceremonies can be both traditional and secular. Usually, the entire wedding is planned around this central event.

How Long Does a Wedding Ceremony Last

The duration of a particular wedding ceremony will be determined by the religious and ethnic backgrounds of the couple to be wedded. The time taken to complete this central ceremony will be affected by the number of rites and rituals that need to be performed.

The length of the wedding ceremony will be dependent on whether the couple decides to hold a traditional, religious ceremony or a secular one. Usually, secular ceremonies are shorter than traditional ones. They are usually completed within 30 minutes.

In the case of a catholic wedding ceremony, the actual union rituals can be completed within a 30-minute window. However, some couples may opt for a mass along with the nuptial ceremony. This will extend the time taken to complete the ceremony up to an hour.

Why Does a Wedding Ceremony Last This Long?

The rites and rituals included in the performance of the central wedding ceremony determine the length of the event. As secular ceremonies only include the signing of the legal contract of marriage in the presence of a judge or magistrate, they are much shorter than traditional wedding ceremonies.

RECOMMENDED
How Long Is The Witcher 2 (And Why)?

However, religious ceremonies are generally longer because of the various scriptural details that are included in the structuring of these wedding ceremonies. In the case of most catholic weddings, the nuptial ceremony has to include the exchange of vows and rings. This is often followed by readings from the scriptures and a homily by the priest. If one opts for a complete catholic mass, then the mass proceedings further increase the time taken to complete a catholic wedding.

The central ceremony in a Hindu wedding is sub-divided into a number of essential rites beginning with the arrival of the Baraat and ending with the Vidaai ritual. Completing these religious rites makes the Hindu ceremony one of the longest wedding ceremonies in the world.

Moreover, if we take into consideration the days leading up to the main ceremony, then the Hindu wedding can last for days. Celebration of the Haldi, Mehdi, and Sangeet rituals precede the main wedding ritual that usually lasts for 4 hours on the actual wedding day.

Muslim wedding ceremonies are shorter than most other traditional weddings because the rituals included in the duration of the actual ceremony are conspicuously fewer. Most Muslim weddings just have one essential ritual that necessitates the cleric to secure consent for the wedding from both the bride and the groom in the presence of a few witnesses. This makes the ceremony relatively shorter.

Most wedding ceremonies are representative of the core values of a religious denomination and an expression of the faith of the couple, who is now entering into holy matrimony. They help sanctify the couple’s promise of togetherness in the presence of a congregation of friends and family members. Secular weddings are also becoming popular among those who wish to step away from the traditional ceremonies.

However, in contemporary times, couples have a fairly large say in terms of deciding the actual duration of their wedding ceremonies. Although religious doctrines are still binding, there is some space for creativity. Couples often decide to include some rituals while excluding others. This alters the total time taken to complete the wedding ceremony.