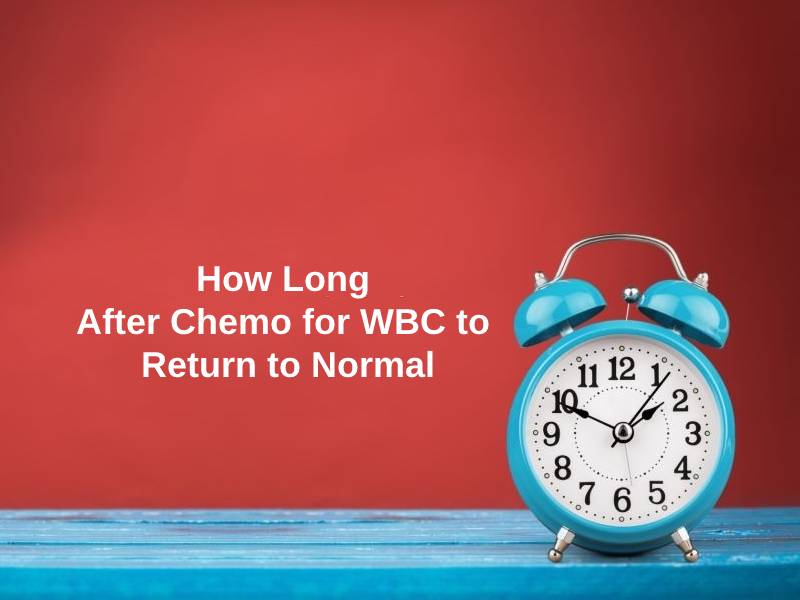 To kill the fast-growing cells in our body a drug treatment named chemotherapy is used, which uses powerful chemicals. This therapy is often used on cancer patients because in cancer the cells grow and multiply much quickly as compared to other cells. Thus, chemotherapy helps in killing these cells and treating cancer.

Chemotherapy is an effective way to treat cancer, bone marrow diseases, and other immune system disorders. But it also has some side-effects as well. Although some of these are mild and can be treated, some can cause severe complications as well. Some of these include vomiting, bleeding, diarrhea, nausea, damage to lung issues, etc.

How Long After Chemo for WBC to Return to Normal?

Although chemotherapy helps in treating cancer and other health issues, it also weakens your immune system. White blood cells (WBC) are one of the most important for our body to fight against infection. But one of the most severe side-effects of chemotherapy includes the reduction of white blood cells. If the count of these cells falls too low then our body becomes more prone to infections.

But when the effect of the drugs wears off after the third week, the cells start to return to their normal count slowly. It takes another week to increase the count of white blood cells above the normal range. To increase the white blood cell count after chemotherapy, doctors prescribe medications like Filgrastim, Pegfilgrastim, and Sargramostim. These are injectable medicines that stimulate the bone marrow to make WBCs faster. These medicines also prevent the white blood cell count from dropping too low. But none of the medicine can stop the WBCs from falling below the normal range.

Thus, after the chemotherapy, our body needs almost 3-4 weeks, sometimes more to recover the white blood cells to their normal count or above.

RECOMMENDED
How Long After Patella Surgery Can I Run (And Why)?

Why does WBC Take That Long to Return to Normal After Chemo?

As mentioned before, white blood cells help our body in fighting against infections. But the most important type of white blood cells which helps to prevent infection is the neutrophil. When there are low levels of neutrophil, it is called neutropenia. And having neutropenia makes the person more vulnerable to infections. There are various symptoms that you can find when the count of neutrophils in your body is low. You may experience a fever that is higher than 100.5 F, i.e., 38 C. You may also experience chills or sweating.

If the count of neutrophils is between 2,500 and 6,000, then it’s considered normal for adults. But if the count is below 1,000, then it’s severe. Sometimes your neutrophil levels don’t return to the normal count that fast. And this is mostly because of the type or dose of chemotherapy. Thus, to avoid that from happening again, doctors either prescribe medicines that will increase the count of white blood cells or delay the next appointment for chemotherapy. The doctor sometimes also lowers the dose of the chemotherapy drugs.

Thus, it takes three or four weeks for our body to recover the white blood cells to the normal count after chemotherapy. Though the doctors prescribe medications, you also can practice some ways through which you can increase the WBC’s count. You can take good care of your immune system before, during, and after chemotherapy. You need to take a good rest, exercise, and reducing stress. To produce white blood cells, our body needs proteins. Thus, including proteins in your everyday diet is a good way to increase white blood cells. Doctors may recommend you to consume multi-vitamins which include B12 and folate, as these are the vitamins needed for WBCs.