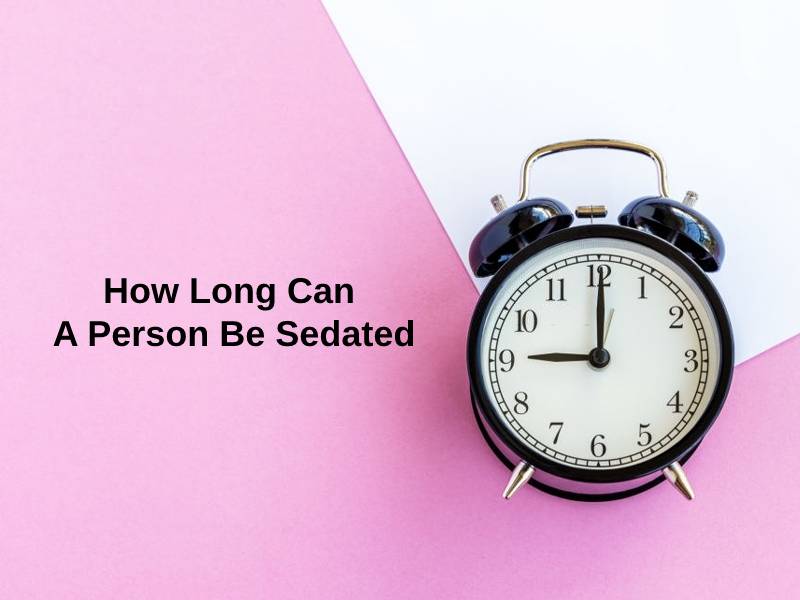 Exact Answer: For as long as medically deemed necessary

Sedation refers to the controlled loss of consciousness in a patient. It is often medically needed to treat different ailments and conditions. The chemical composition of a medical sedative essentially works to restrict the ability of a patient to respond to any external stimuli.

During various surgeries and procedures, such sedation becomes essential. Patients may also be sedated to reduce their anxiety levels. Thus, medical sedation is often used to counter mental health issues in patients. There are various levels of sedation that are prescribed to a patient on the basis of the particular concern that is to be assuaged.

How Long Can A Person Be Sedated

There is no maximum upper limit to the sedation period of an individual. The definitive medical treatment route being pursued by a physician determines the exact time frame.

Certain procedures require shorter periods of sedation. For instance, dental procedures, endoscopies, etc. require lighter sedation. These procedures can be carried out with localized anesthetics or general anesthesia. In the event of using the latter, often the patient is brought out of the sedative state within a short span of time.

However, when deep sedation is used in the event of longer procedures or major surgeries, the time frame of remaining unconscious significantly increases. Most surgeries last for over 3 to 4 hours. In some cases, major surgeries can take as long as 20-40 hours. Thus, the patient remains sedated for this prolonged time frame.

Similarly, in the case of certain medical conditions like nervous breakdowns, pneumonia, and brain traumas, etc., the doctor may need to prescribe a certain period for maintaining the medically induced coma state. In such a situation, the patient cannot be weaned off the sedative until the condition of the individual improves according to the doctor’s parameters. In some cases, a patient is kept in a comatose state for up to several years.

Why Can A Person Be Sedated For So Long?

The sedation method and the time frame will be hinged completely on the doctor’s specific orders. Several verticals like the age, gender, co-morbidities of the concerned patient are taken into consideration before formulating the plan to induce sedation.

RECOMMENDED
How Long Does a Person Stay Up in a Day (And Why)?

Usually, a patient can be weaned out of sedation quite early during a marginal procedure because he/she is simply needed to remain unconscious for as long as the procedure lasts. Since most of these procedures are minor, they are completed well within a short period of time and the patient can regain consciousness shortly after they end.

On the other hand, for procedures that are longer like major surgeries, patients are needed to remain unconscious so as to not remember the trauma of the surgery. Longer periods of sedation help them remain isolated from the medical trauma of the various surgical steps. Deep sedation during long surgeries also helps patients remain ignorant of the pain of the procedure.

Patients are kept in medically induced comas for a prolonged time frame to help their bodies heal. This period can extend well into months and even years. Sometimes when a patient encounters a nervous breakdown, doctors put them in a coma to assuage their anxiety and help their brains gain the much-needed rest.

For such situations, special care has to be taken for the unconscious body like preventing bed sores and ulcers. Most patients can only be weaned out of sedation upon the doctor’s orders. Removing sedation without the doctor’s consent and approval can harm patients. It can also be traumatic for the patient in question.

Sedatives are strong and powerful drugs used under the authorization of doctors. They help make patients unconscious during medical procedures. However, their usage can only be regulated by the doctor in charge as he/she is well-versed with the patient’s medical history.

The total duration of sedation for any patient will be determined by the doctor. The sedation period varies greatly from one individual to another. Moreover, it is also important to remember that there are no upper limits to sedation. The doctor judges each medical situation differently and prescribes sedatives, if and when needed. Thus, it is his prerogative to decide on the right time to wean the patient out of the sedated state.