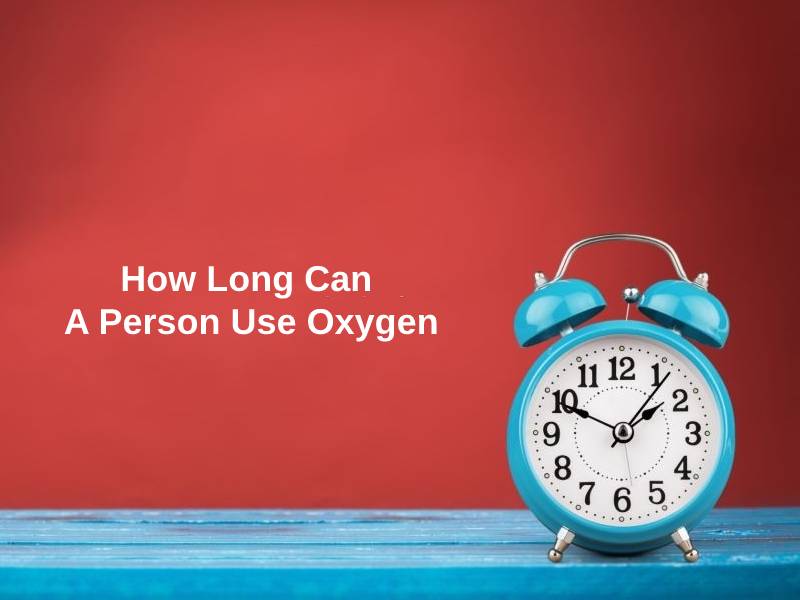 Exact Answer: Up to 15 hours each day

Oxygen has been a therapeutic agent for about a century. Oxygen is essential for survival, but often people with lung disorders cannot breathe enough oxygen naturally.

Oxygen therapy or supplemental oxygen refers to the use of oxygen as an artificial treatment. It is prescribed to people with lung conditions that prevent the lungs from absorbing oxygen.

While some people need supplemental oxygen occasionally, others may need it more frequently. In acute cases, it is popularly used as an emergency treatment. However, chronic cases of low oxygen such as chronic obstructive pulmonary disease (COPD) require long-term oxygen therapy.

How Long Can A Person Use Oxygen?

Some patients only require oxygen during a particular set of activities – such as physical exercise or sleeping. Others, who may need it constantly, carry portable oxygen tanks with them everywhere. Patients must use oxygen as long as prescribed by their doctor.

Patients with a chronic obstructive pulmonary disorder or other chronic lung diseases may require supplemental oxygen at all times. COPD makes it hard for people to breathe naturally. It causes damage to the lungs, preventing them from absorbing and releasing sufficient air. Oxygen therapy makes breathing easier for people with COPD and helps them stay more active.

An adequate concentration of oxygen should be administered during this treatment. Insufficient supplementation may procure ineffective results, while excessive oxygen could lead to oxygen toxicity. Generally, oxygen should be stopped when the arterial oxygenation balances the patient breathing room air.

Why Can A Person Use Oxygen This Long?

Most chronic lung diseases gradually deteriorate with time. In such cases, the lungs cannot maintain sufficient oxygen in the bloodstream any longer. It becomes necessary to use long-term oxygen at home, generally through a machine.
Such patients need supplementary oxygen for a minimum of 15 hours every day to survive. The amount of oxygen required needs careful assessment and monitoring under a doctor’s guidance. It may increase over time.

RECOMMENDED
How Long Does it Take to Suffocate – (And Why)?

Oxygen is a medical drug and should be administered for an adequate length of time. When used sensibly, it can help treat hypoxaemia and save lives. However, inappropriate use may lead to the dangers of over-oxygenation.

Excessive intake of supplementary oxygen can cause lung damage or oxygen toxicity. Also known as oxygen poisoning, it is a dire side effect of oxygen therapy. Regular symptoms of this condition include troubled breathing and coughing. Severe cases of oxygen toxicity may even lead to death.

Breathing oxygen at high partial pressures leads to the development of a state of hyperoxia, which infects the most vascularized tissues. Hyperoxia often occurs when the patient is exposed to supplemental oxygen longer than the required dose. Therefore, care must be taken to not overdose a patient on oxygen therapy. For an O2 saturation of 100%, exposure should not exceed 12 hours.

Although the ideal oxygen saturation range in healthy individuals is 94-98%, patients with a risk of T2RF should maintain it between 88-92%.

Oxygen supplementation gained popularity in medical treatment after 1917. It has become the most conventional hospital treatment in most developed countries.

Oxygen is necessary for regular cell metabolism. Oxygen therapy enhances the quality of life. It helps deal with shortness of breath, exhaustion, and sleep issues. It speeds up bodily function during emergencies and increases life expectancy for people with COPD. If administered correctly, oxygen therapy can help people with chronic diseases live longer, healthier lives.

However, supplemental oxygen should be treated as a regular drug and used strictly according to a doctor’s prescription. The treatment should be monitored carefully to prevent any adverse effects.