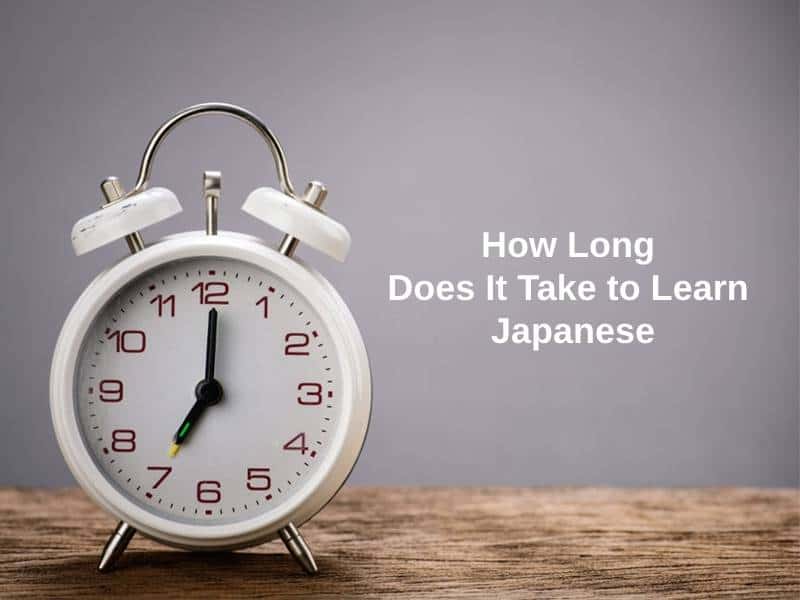 Is it ever too late to add a new skill to your profile? The answer is No. There is no age limit to learn a new skill or activity. One can always figure out the options of interest and achieve them. Some of the skills may take longer than others, while some of them could be child’s play. One of such skills is learning a new language. It could be a native language or a foreign one. Nowadays, it attracts a lot of people towards it. There are numerous schools, institutes, and even online platforms that facilitate the learning of these languages. Learners take great interest in learning foreign languages like Spanish, French, Korean, Chinese, Arabic, Japanese, etc.

In this article, will be learning about how long does it take to learn the Japanese language from a basic level. Since the script of Japanese is totally different than languages like Spanish, German, etc. it may take longer than the usual duration for the learner.

How Long Does It Take To Learn Japanese?

Japanese is known to be a beautiful but difficult language. People with English as a native language are expected to find this language harder than other Asian and European Languages. There can be various reasons why an individual would like to pursue this language and on the basis of these reasons, we can calculate how much proficiency is required and how much time it will take to reach the desired level of proficiency.

The basic level of proficiency that may take up to 6 months will help the learner to have conversational skills. The learner will be able to watch Japanese TV shows, can communicate with Japanese clients if the purpose is business-related, and understand the messages and emails with the help of a dictionary. The basic level teaches the learner about Japanese script and alphabets, leading on to forming words and basic conversational sentences.

While moving towards the intermediate and advance level of proficiency, which is deemed as fluent Japanese, the learner is expected to devote more time which may extend up to 2 years, if the purpose is to write and speak in Japanese, work in a Japanese based industry, or to speak publicly in Japanese without hesitation and fear. The learner after achieving this proficiency may become capable to read, speak and write Japanese in the same way as his/her native language.

RECOMMENDED
How Long Should a Person Wait To Marry (And Why)?

Why Does It Take That Long?

The US department has asserted that Japanese is one of the hardest languages for English. It has minimal similarities with the English Structure of language. There are three scripts in Japanese namely Hiragana, Katakana, and Kanji. Hiragana and Katakana are used to understand the syllables used in Japanese and their sounds. Learners have asserted that people who want to learn the basic and conversational levels of proficiency in the language can easily learn Katakana and Hiragana scripts in few months.

To attain an advanced level of proficiency, one needs to master the Kanji script. Kanji is the tool to join the dots between written and spoken Japanese. Kanji is seen to be the hardest script out of three. It contains the grammatical patterns, the scheme to frame sentences while speaking and writing, etc. One can always understand the words written by learning the first two scripts but for the purposes like delivering a Japanese speech, writing a Japanese journal or report, or aspiring to achieve a career in Japanese as an academician, the learner needs to devote 8800 study hours to Japanese.

It is also found that people who have studied Japanese and alongside engaged themselves in Japanese artworks like cinema, music, culture, etc. have learned the language faster than others while the ones who lacked commitment and dedication to learn the language have failed to achieve the desired results. Consistency and willingness also play a great role while deciding the duration of learning a new language.

If you are willing to learn this new language, you must keep in mind that it is going to take a bit more time and a little more effort than learning other languages. As the Japanese economy has always been healthy and flourishing, the fruit of the hard work will be paid off to you. Being consistent while learning the language for prescribed time will surely lead you to Japanese proficiency, and in turn, will open a new door for your career opportunities.