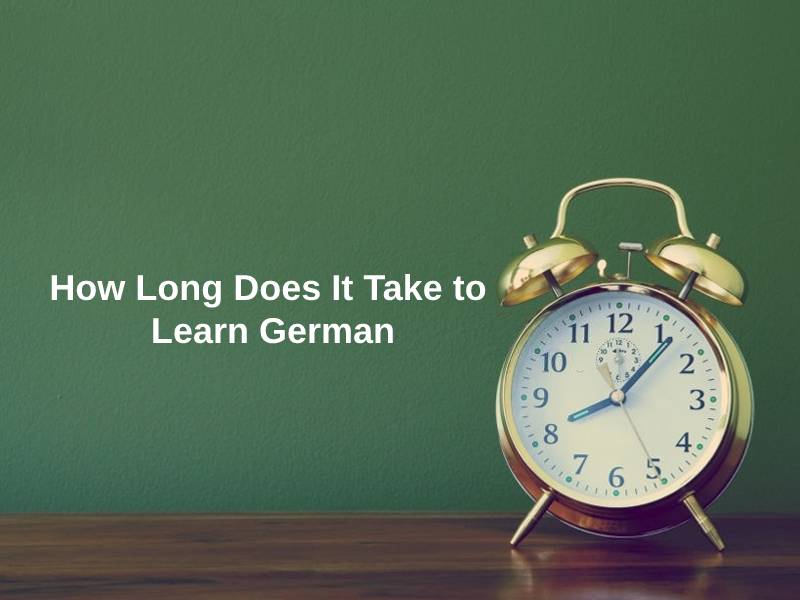 Versatility in languages is often considered an elite skill and is seen as a mark of intelligence. Different language skills will not only cast a very good impression but will also come in very handy in many different scenarios.  It is easier to learn a new language at an early age but it gets more difficult and tiresome as adults.

How Long Does It Take to Learn German?

German is a language that is widely popular but also considered to be complicated and difficult to get the hang of. Over 200 million people speak German, which makes it one of the most popular languages in the world.

Knowing the German language will more often than not prove to be a very impressive skill. It is often said that German is a very difficult language to learn but the truth is with enough practice and hard work it can be mastered.

Many factors determine how difficult or easy learning a new language might be. The Foreign Service institute or FSI has made it easier to track such things here in this case. It grades languages into certain levels based on how difficult they are to learn.

Learning German may take longer depending on:

English and German are somewhat closely related languages. They have descended from the same family of languages – the Germanic family. Hence it will be comparatively easier for people who speak English to learn German. English speakers can learn German in about 30 weeks or approximately 750 classroom hours.

Why Does It Take So Long to Learn German?

German has been graded a level 2 language by the Foreign Service Institute or FSI. This means that compared to some other languages such as Mandarin, Japanese, Arabic, German is easier to learn and takes much lesser time to master.

RECOMMENDED
How Long is Drivers Ed - (And Why)?

The amount of time spent in learning the language also determines how well and how fast one can learn the language. Most people can spare a few couple hours every day at most, and if this is by the standard set by FSI then the best results can be guaranteed.

Many methods can be employed as well to get maximum exposure to language and imbibe it as quickly as possible. Some of these include reading more books in German, watching German movies, listening to German music.

Which course to learn from or which tutor to choose can speed up the process. There are some great websites, courses, and apps available that can be effective. Most importantly, practice plays the biggest part in learning a language. Interacting with the language and exploring it as much as possible is the best possible way to learn it very fast.

Learning German can be a fun and exciting experience depending on how it is done. It takes approximately 30 weeks or 750 hours to learn German. This process can be sped up depending on the other methods the user implements. There are many things the user can do to make it faster like being more indulgent in the process and exposing themselves to the language more. taking in more content in that language and medium is a very good way to familiarize oneself and get acquainted with it. Moreover, finding a good teacher and working hard with enough practice is the best way to go about it.