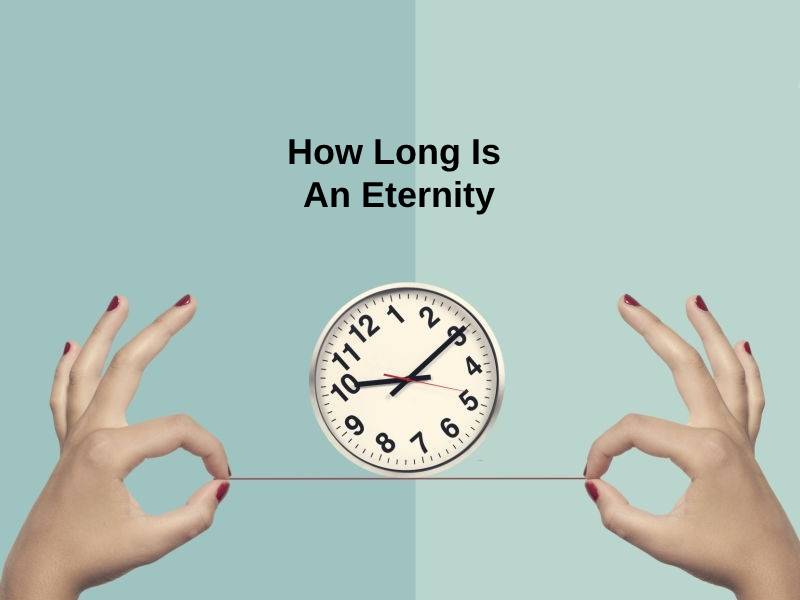 Eternity is a period which no one particularly knows about. It has been emerging for ages and still going on. It has no length or breadth, so as to signify how long it can go in this universe. When in our regular conversations we want to denote a long time, we use the word eternal. However, eternal is the word that often signifies the spiritual aspect of this universe.

The spiritual realm of the universe defines eternal to be something that never diminishes, something that is ever-growing and is not time-limited. Eternity is far away from the illusion of time and limits and extends beyond basic humane comprehension.

How Long Is Eternity?

When the term Eternity comes into play, it is often associated with the concept of heaven and hell. No human has witnessed the duration of eternity by his own eyes as it existed before birth and stays after death, The life we live is just a fraction of what eternity is.

Eternity is a vast-visible form of the universe- always expanding. Where Christianity links the word with the concept of Heaven and Hell, Hindu Mythology calls it Akshar Brahman, ie the Ultimate reality. Bhagwad Geeta insists that one who has opened his divine eyes, called DivyaChakshu to his inner self, may experience the feeling of being an eternal soul.

To call eternity timelessness is an oversimplification. Even though infinity excludes the past and the future, it is still right to refer to it as existence, which is one of the three essential aspects of time.

The essence of the present has a temporary meaning as the Platonic tradition has given the idea of afterlives and the same idea has been passed down to Islamic and Christian Mythologies. However, when we look upon the Buddha’s sayings, he defines eternity as a part of Nirvana, where all the time domains, ie, past, present, and future are dissolved and the person achieves the highest state of divinity and enlightenment.

RECOMMENDED
How Long is a Short Story – (And Why)?

Why Is Eternity Infinite?

Eternity is the state of divine interventions that allows it to apply to all times with equal immediacy and potency. Since infinity encompasses all of the time, it’s easy to mix it up with the closely related idea of “always was, is, and will be,” or, in other words, the eternal. Since the word has its own divine interpretation, it becomes impossible to formulate how many seconds or minutes or hours or years will contribute to one eternity.

Eternity is beyond anything that a human brain can comprehend. It is so because humans can only think that the condition we know of the soul’s life is time, making one’s encounters with eternity drastically episodic and lost.

Eternity is something related to the feeling of the inner self’s wholeness. It is the divinity we achieve when our soul, body, heart, and mind are aligned together that time seems like an illusion. But when interpreted in time like expression, it is said to be unlimited because there is no measure of self-enlightenment.

It appears to be a rather timelike word. The terms like the beginning, ending, middle, etc are closely associated with the term of eternity and completion, as expressed in the English language. But, when looked at philosophically, eternity is a timeless religious concept, that is perceived in various mythologies by various approaches, but all of them somehow highlight the virtue of the afterlife, divinity, and the essence of the soul.

Various cultures and religions have taken different approaches to the concept of eternity. But there lies one thing in common in each one of them, that is the divine soul work we have to do for us. These mythologies do not define the time span to achieve it, some define it as after-life work, while some define it as an inner work we do during our lifetime. Therefore, to put together the pieces of various mythologies, we can say that there is no time prescribed to define eternity. It is infinite and ever-expanding just like the Universe we live in.