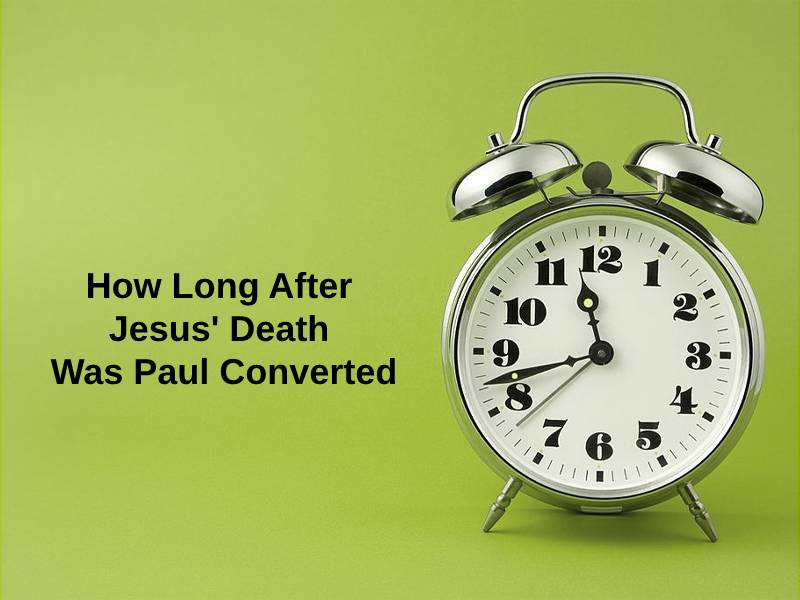 Jesus died between 28AD to 29AD at the age of about 35-40 years. After his death, Jesus made an appearance before Paul while he was on his way to Damascus. This is the time when Paul was converted into a Christian. While it is difficult to collect the exact timings of these events while going through the Bible, some researchers and historians believe that these incidents took place somewhere between the period 33AD to 36AD.

Paul took birth on 4BCE at a place in present-day Turkey which was then called Tarsus. During his lifetime, he has been considered as one of the most significant personalities of Christianity after Jesus. Being a great leader, he led the first generation of followers of Christianity. Although he was the leader of a Christian movement, which was very small, he had a lot of enemies.

How Long After Jesus’ Death Was Paul Converted?

He was not much respected by his contemporaries. Hence, he had to choose the path of struggle to gain power, position and authority. His letters, which have survived till date, has impacted the thoughts of Christian minds and have made him the most powerful religious leader that ever existed.

Paul originated from the Asia minor. He was a Jew by religion and spoke Greek. He was born in the Syria province under the rule of Romans. The two most important cities of the province, play a pivotal role in shaping his life and penning his letters. He became part of a missionary during the 40s of the 1st century after Christian Era.

During his childhood, he was taught to feed his stomach by dint of his hands. He was taught to make a tent and indulge in trading. He stuck to his professions even after being converted to Christian. This explains the significance of him and his apostleship under him.

He had the ability to shift from one place to another and settle there only with the help of few tools used for making leather. He was neither too poor nor too rich. His literary letters and texts were in the Greek language used by the common people which proved that he didn’t belong to an aristocratic household. He had the ability to dictate letters and could easily write letters with his own hands.

Paul served as the member of the party, Pharisees which had evolved in the later period. He worked for it and served it until the mid of his life. This religious community believed that there is life after death. They claimed that the traditions not present in the Bible are as important as the ones proclaimed by the holy book.

Why Paul Was Converted So Long After Jesus’ Death?

Paul was very well known for traditions. He was well knowledgeable about the Hebrew Bible and had the ability to use it during his translations into Greek. For Paul, it was a herculean task to move around with bundles of scrolls of the Bible. He was regarded as the most honest and the most humble Jew of his time.

RECOMMENDED
How Long After Arrest Is Trial (And Why)?

He suspected the process of resurrection and hence, it was difficult on his part to believe God’s favour towards Jesus. He was constantly engaged in shifting from one synagogue to another to punish the Jews who considered Jesus to be their messiah. These unfaithful Jews were punished accordingly and in some part of his life, Paul had even been punished twice.

Paul did not know the Christian followers of Jerusalem until he himself was converted to Christianity. Till then, he continued punishing and persecuting people for their flaws. One day, Paul was destined to go to Damascus, one of the two most significant cities of the Syria province of the Roman Empire.

During his voyage, God spoke to Paul about his son. He started believing in the fact that Jesus was the Messiah and the chosen favourite of God. This is when he received the light to change into Christianity. After returning to Damascus, he travelled to Jerusalem after 3 years. This is when he met with famous apostles.

After this meet with the apostles, he went to preach to Syria and other regions. He travelled for about 20 years preaching and established churches in Asia Minor, Europe and other regions. During his travels, he observed the difficulty being faced by the Christians, the inhabitants of Jerusalem. Keeping in view to settle this dispute, Paul decided to be the apostle of Gentiles.

After being converted to Christianity during 33BC – 36BC, he fled away to Damascus as a result of his persecution. He interacted with various apostles after which he started preaching at various nations. During 44BC – 46BC, he was given an invitation to teach at Antioch. With the company of Barnabas, he went to various places and distributed relief.

In 47BC, he started with his first journey as a missionary to Cyprus. In 49BC, Paul and Peter confront a fight regarding the Jewish laws. Paul travelled wide and finally returned to Jerusalem during 57BC – 59BC. He was kept captured at Caesarea.

Paul went on a journey to Rome during his last days. Finally, he breathed his last after returning from Rome. He was martyred in 64BC.