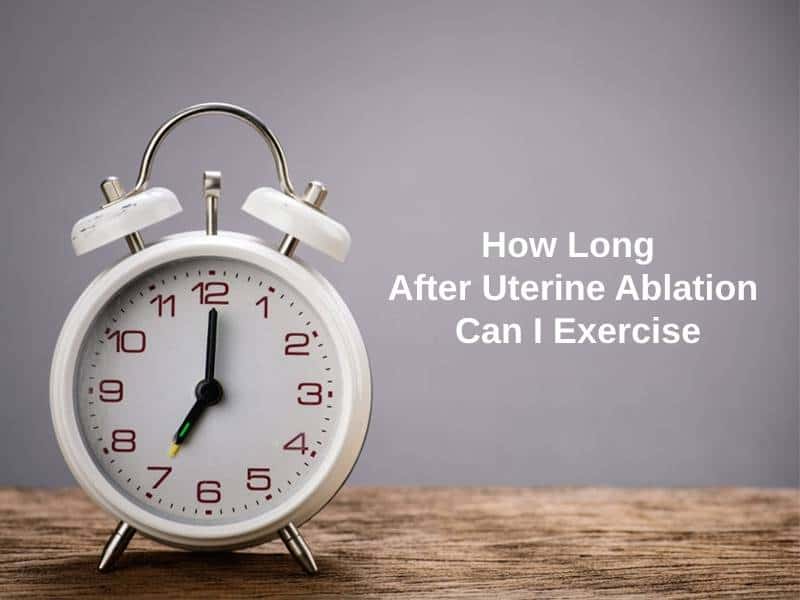 Uterine ablation, which is scientifically known as endometrial ablation, is a type of surgical procedure carried out to remove the ablate and destroy the endometrial lining present in the uterus. This surgery is mainly carried out in women who suffer heavy bleeding during their menstruation period.

A woman who wishes to have children in the future should not opt for endometrial ablation. Women who have not recovered well in various medical therapies related to menstrual issues go for uterine ablation more often. Adenomyosis or Dysfunctional uterine bleeding is the most common reason behind heavy menstrual bleeding.

How Long After Uterine Ablation Can I Exercise?

The surgical procedure of uterine ablation is carried out as an outpatient treatment. It is done either at the hospital or in an ambulatory surgery center. In general cases, local anesthesia or a light sedative is given to the patient. However, if the patient still feels pain, then general or spinal anesthesia is given by the medical expert.

The ovaries are left intact in this process, and hence the hormonal activity of the patient remains unaffected. However, if the patient becomes pregnant after uterine ablation, then it can cause placenta accreta. Therefore birth control is necessary for this process. Although pregnancy is rare after the surgery, it can be fatal for the mother and the child if it does happen.

Uterine ablation was first performed in 1898 when a thirty-seven-year-old woman was treated by introducing steam for two minutes. The steam was introduced in the uterine cavity of the woman. A medical expert named Duhrssen is credited for experimenting successfully. After completing the surgery, complete atrophy was observed in the uterus. Eight out of ten women see a significant loss in their menstrual bleeding.

The body becomes weak after the surgery, and it requires some time to heal correctly. Partial recovery from the surgery is observed in three to four days, after which normal daily activities such as walking and regular exercises can be done. However, to perform intense exercises such as running and weight lifting, complete recovery is necessary, which is achieved in around two weeks.

RECOMMENDED
How Long Does Clonazepam Stay in Your Urine (And Why)?

Why Does It Take That long After Uterine Ablation To Exercise?

Heavy menstrual bleeding can cause a lot of problems in women. Heavy periods lead to the soaking of sanitary pads or tampons in around one hour, which is lesser than usual. Women also complain of bleeding that lasts longer than the regular duration of eight days. Excessive blood loss in females also leads to amnesia, which weakens their bodies and makes them vulnerable to several other diseases. To contain heavy bleeding, doctors first take the help of various medicines available. However, if medicines don’t work correctly, then it is advised to undergo surgery.

It takes that long to exercise after completing the uterine ablation surgery because the body needs an ample amount of time to heal completely. Performing exercises immediately after the surgery might be excruciating and could also trouble the woman while sleeping and urinating. It is advised not to put a lot of pressure on the body. The uterus needs to recover completely, and the body also needs to heal properly from the effects of anesthesia.

The surgery is very effective, but it does have a few complications. The surgery can lead to bowel burn, which can lead to death. The process can also cause burns to some parts of the uterus, which can be very painful. Perforation of the uterus is another side effect caused by the surgery. It is crucial to consult a medical practitioner in case of any discomfort.

Overall, it can be concluded that uterine ablation is carried out to control the blood discharge from a woman’s vagina during her menstruation period. Heavy blood flow is quite unhygienic and painful. The surgery was first performed in 1898 and successfully controlled the amount of blood leakage in the patient.

On average, it takes three to four days to recover from the surgery and to resume normal activities. However, for complete recovery and to start doing intense exercises, the patient must give the body two weeks to heal. In case of any complications after completing the surgery, it is imperative to contact a medical expert immediately.