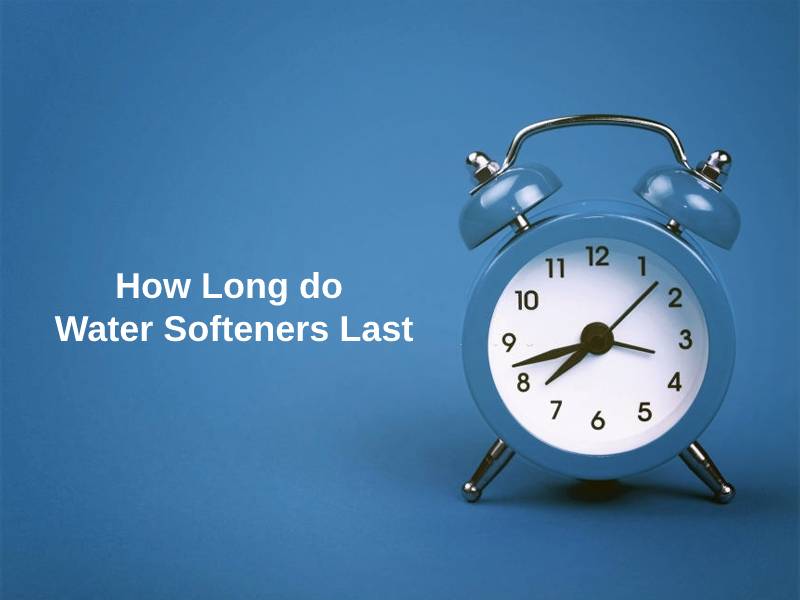 A water softener is a filtration system used to remove hard water caused by the high concentration of calcium and magnesium. When water passes through this, the unwanted minerals are removed and the water is passed on for plumbing.

Hard water can be a major issue for anyone. This is because they accumulate easily inside boilers and water heaters etc. Thereby decreasing the performance and efficiency of the device. It can damage anything and everything.
It can leave a lasting unwanted effect on any surface it passes on. Water softener becomes the only answer in those difficult times. It can help to smoothen out the water.

How Long do Water Softeners Last?

Salt-Based Water Softener
This is an ion-based water softener. These are the traditional type of water softeners usually used in the early stages of water softening. But these are now banned in some places of the world due to them being a threat to the environment.

The resin used in the ion exchange in the process is regenerated using salt. This regular maintenance should be done almost every week. This system lasts long for about 15 years and replacement isn’t expensive. But regular refilling of salt is a difficult task

Salt-Free Water Softener
Salt-free water softeners don’t require regular maintenance as that of ion-exchange softening. They don’t remove the hard water instead, they neutralize them from creating hard water build-ups. This type of water softener is expensive. Many kinds of these softeners utilize multi-stage filtration processes for removing harmful contaminants.

The lifespan of this varies according to the size used. In most cases, they last up to 5-10 years. After which they should be replaced.

Portable Water Softener
These types of water softeners are very convenient as they could be taken anywhere we go. These are mainly used by travelers who road travel using travel trailers. They don’t require any special kind of salt as regular table salt can be used.

Reverse Osmosis Water Softener
These kinds aren’t generally considered water softeners. But they do the job meant for water softeners by removing the hard water and even introducing healthy minerals into the water. But in most cases, they only provide water through one faucet.

RECOMMENDED
How Long Can A Person Block You On Facebook (And Why)?

These kinds of systems last up to 10-15 years. But for the system to last this long, it should be regularly serviced as per the service intervals mentioned during installation.

Why do Water Softeners Last Long?

By using salt for softening, the water softener can last long because they only require regular maintenance of providing salt for the ion exchange process. But this could be a tiresome process as most water softeners that use salt require refilling of salt almost every week.

Water softeners last long because they have the capability to last long due to the hardware present in them. The main content used is polystyrene-type gel resin. These are highly porous, have skeletal structure, and have beads.
Water flows through the resin in the softener which exchanges the unwanted ions. After attaining high capacity, the resin initiates a regeneration cycle by which sodium chloride brine solution passes through the resin, and the unwanted hardness-causing ions are flushed out. Hence these last long.

Hard water can be an unwanted nuisance in our day-to-day lives. This can be reduced or altogether removed by using things like water softeners. These water softeners have plenty of benefits. They can make us have healthier skin, shiny hair, cleaner clothes, good drinking water.

The benefits of having water softeners counter hard water do very much matter. But the usage of the type of softener should be considered. This is mainly because salt-based water softeners should not be considered as they release chloride from the salt to the sewage which is harmful to aquatic creatures.