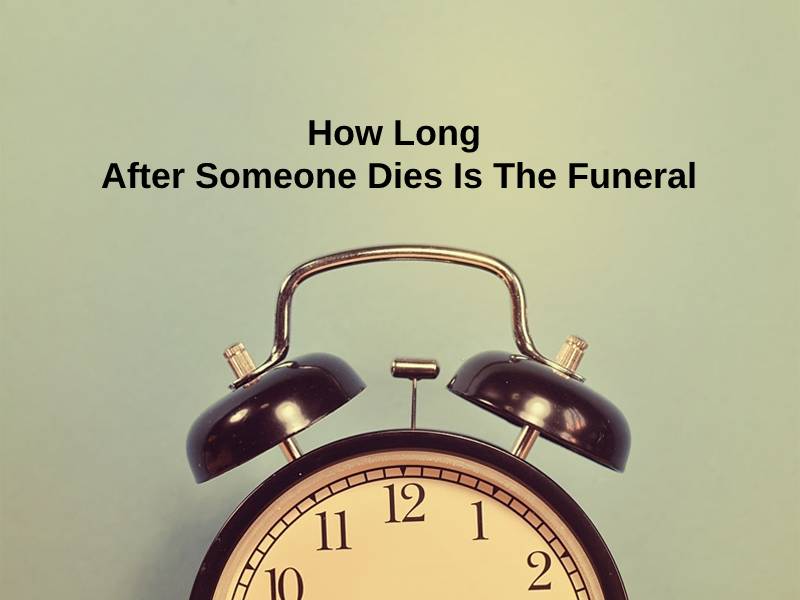 A funeral is a ceremony that is held to pay respect to the dead. It marks the final disposition of the body. Different religions have different methods to dispose of the corpse. While the Hindus burn the body for the attainment of ‘mukti’, the Muslims bury the corpse. The Christians are believed to put the dead body in a coffin and bury it. This is known as the funeral.

How Long After Someone Dies Is The Funeral?

Even though we discussed that different cultures and religions follow different methods to conduct their funerals, the time period after the death of an individual, when the funeral happens is within 1 week. Usually, setting the date of the funeral depends on a number of factors. They are:

Condition Of The Body

The condition of the human body starts deteriorating the moment a person dies. Thus, it becomes necessary to cremate, burn or bury the corpse. The time that should be ideally taken to dispose of the corpse is within a day or two.

In some conditions, the family members of the deceased person are not available for the funeral ceremony. Sometimes because the members stay far away from the person who is dead and sometimes, their worsening health conditions does not let them do so. Hence, it leads to a delay of 2-3 days or more.

Availability Of The Funeral Home

Due to various reasons, the funeral homes do not give a scheduled time for the funeral ceremony. This can lead to a delay of about 4-5 days. In such cases, the body is kept in cold storage so that its condition doesn’t deteriorate.

Transfer Of The Body From One City

In many cases, it is found that the worsening health condition of the patients forces their families to shift them to better healthcare institutions in other cities. When such patients die, their bodies are brought back to their hometown. Even in cases of deaths of the soldiers and other criminal cases, the bodies are transferred from one city to the other which takes a lot of time. This delays the funeral for some 5-6 days.

RECOMMENDED
How Long A Person Exercises (And Why)?

Looking at the above factors, we can summarize that,

Why Does It Take That Long For The Funeral?

Funeral ceremonies are known to serve different purposes to different communities. But the main components that are directly proportional to each other are the engagement in funeral ceremonies and the adjustment to the grief of losing a family member or friend. The funerals are a result of these interconnections created by society.

The human body is comprised of 724 trillion cells and a number of organs. After the death of a person, all the organs start deteriorating within some days and if the body is left open at room temperature, it starts decomposing. Hence, to honor the person, and his life, people from different cultures and religions around the world, conduct the funeral ceremony. Due to the above-discussed factors, the funerals might get delayed but are usually held within a week.

Another aspect that must be mentioned is that a funeral can indeed be forced to take place in that time frame, not by a human agency, or any such factor but by the existing circumstances. In certain cases, a traditional funeral cannot take place owing to the causes or conditions of death.

In cases of death by murder or deaths where no family member comes forward to claim the body or other unnatural causes, a postmortem is customarily conducted. In those cases, a traditional funeral does not take place, and the body is cremated or buried or dealt with by the family members, only after the post-mortem is over irrespective of the amount of time it takes. Thus, it can be seen that not only certain factors but certain circumstances are also responsible for the funeral being held at that time.

Funerals are being held since time immemorial. Different methods are used all over the world to conduct funeral ceremonies but the purpose has been the same, i.e., to honor the dead. Though the time taken to conduct the funeral may vary depending upon various factors, it is usually held within a week of time.