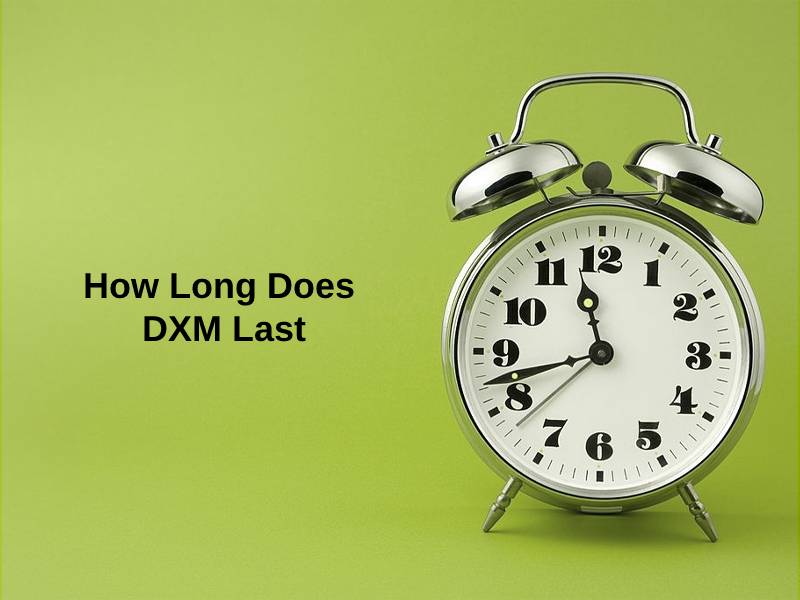 Exact Answer: Up to 6 hours

Dextromethorphan or DXM is a cough suppressant that is present in cough syrups and cold medicines, which are available over the counter. So even though it is legally an actual medicine, some people more often than not abuse it for various reasons. Cough syrup tripping, dexing, robotripping, and various other names are used in reference to such practices of getting “high” off of over-the-counter medicines, which gives it the tag of poor man’s psychosis.

DXM is an “active” which has hallucinogenic properties and consuming a certain amount of it can lead to a mild high or euphoria. Due to its easy availability, it is often abused by teenagers and students which leads to abusing hard drugs later in life. It goes by various names like Dex, Gel, Triple C, Skittles, Sky, Velvet, Vitamin D, Drank, etc.

How Long Does DXM Last?

The after-effects of consuming DXM depend largely on the amount of product consumed and also the age, BMI, gender, and other bodily functions of the user. After the first dosage of DXM, the user feels a little bit of euphoria and overall they are more energetic, sociable, and outgoing. It is similar to the after-effects of abusing ecstasy and then as they go up the dosage they hit the second plateau where the effects are similar to the alcohol intoxication with worse motor control and other cognitive abilities.

Then with the next higher dosage, the user hits the third plateau, where it produces effects similar to that of ketamine with strong hallucinations, dissociation, and loss of motor control. The final plateau has similar effects to that of PCP which leads them to have “Outer body experiences” even stronger hallucinations, lessened pain perceptions which can lead to violent behavior as well.

As it is legal and easily available, teenagers and students often become addicted to it, and also being a cough syrup active, it goes under the radar for longer as compared to traditional drugs. Teenagers often have been reported to abuse 10 tablets daily to maintain a consistent high but in serious cases of consuming more than 33 tablets, it can lead to seizures and even a comatose state.

In summary, the effects include:

RECOMMENDED
How Long Does a Drug Test Take – (And Why)?

Why Does It Take So Long?

All these effects take about thirty to sixty minutes to kick in and they can reach their peak around 2 to 4 hours. But that too is subjective as it depends upon the body mass index of the user, the dosage, body size, amount of food in the stomach, and so on.

The effects of DXM can last from two and a half to six hours and it varies from person to person given their biological health, diet, metabolism, weight, his of DXM use, and dosage. Due to these different people experience more intense symptoms of robotripping than others.

Dextromethorphan works on that part of the brain which is responsible for the cough reflex, and how it works is that it disrupts the communication between the brain and the nerve which is responsible for coughing. These nerves are present in the airways like the trachea, bronchi, lung sacs which connect to the brain via the spinal cord and send signals to the brain for the appropriate response. The drug DXM blocks the “lock” so that the “key” does not fit and the repetitive coughing stops temporarily.

The treatment of DXM overdose or abuse can be treated in the hospital where they might require breathing support, drug blockers, laxatives, intravenous fluids, and activated charcoal. They might even need to go on antidepressants and antipsychosis for their mental health.

In conclusion, DXM has both benefits and harmful effects even consumed in larger quantities, thus both the usage, sales, and even dosage need to be highly regulated especially in teenagers and students who are more susceptible to get addicted to it. It can even have long-lasting effects on the mental capabilities and psyche of the user if they are in their adolescence or a heavy user. What makes it even more dangerous is that it cannot be detected using standard urine drug tests, so it is important that the clinicians are aware of the psychiatric sequelae of DXM use, recreational or regular.