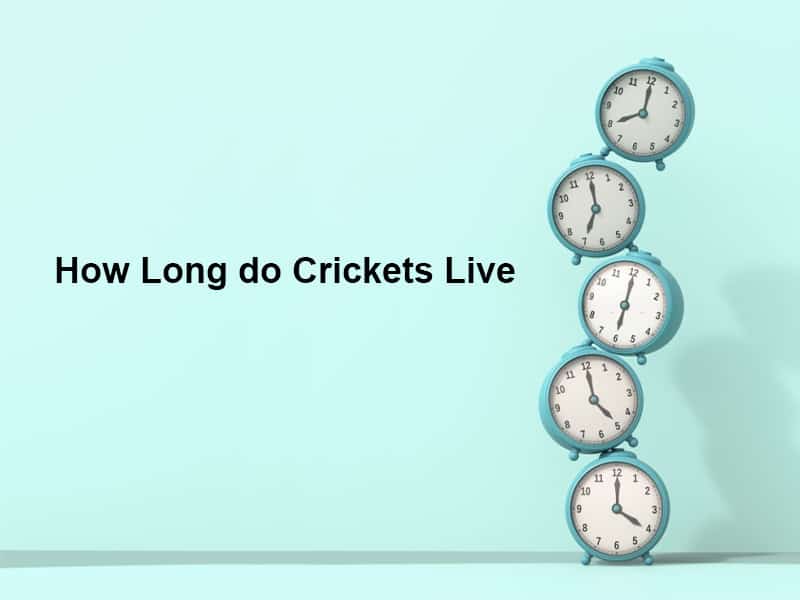 Crickets are a relative of the grasshoppers. Both crickets and grasshoppers have large hind legs for hoping. Crickets can be found in various places, including the grasslands, bushes, forests, beaches, caves, and also indoors in our homes.

They are known for their loud, irritating chirping at night. The chirping is a song done by male crickets to attract females. The male cricket wings are what produces this chirping sound.

Regardless of their roaches like appearance, some people in China and Europe keep them as pets. Do you think this is ridiculous? In South-East Asia, they are sold deep-fried as snacks in the local markets. The main question, however, is, how long do crickets live, and why that long?

How Long do Crickets Live

The life span of cricket depends on the type of species. There are over 900 species of crickets world-wide. The common ones include the field crickets, camel crickets, and the house crickets.

A female cricket usually lays hundreds to thousands of eggs. With an incubation period of 14 days, these eggs hatch into small nymphs. The nymphs slowly become adults, taking a development period of an average of 90 days.

Mole crickets live for as long as two years from egg to adult stage. They spend the entire winter deep underground.

In the case of other cricket species, the males die as soon as the mating season ends. The females, however, live on until the nymphs hatch before they die. Adult crickets that have not reproduced in spring survive the winter by hibernating.

Survival from generation to generation depends on how well the females hide their eggs from males. The males feed on eggs laid by the females. The eggs need to be in a location where the temperature is between 27 to 32 degrees Celsius.

The table below shows the lifespan of field, camel and house crickets:

Why do Crickets Have Lifespan of 2-3 Months

After reaching its adult form, a cricket might live for a month under favorable conditions. Most crickets do not live up to their life expectancy. Various things can alter how long crickets live. These include:

RECOMMENDED
How Long do Pugs Live – (And Why)?

Crickets living indoors can live for quite a long time. Captive crickets in a controlled environment have been reported to live for up to two years under perfect conditions. In such habitats, natural predators and hostile weather are removed.

Crickets only go into people’s homes to escape the cold weather outside or hide from predators. Field crickets mostly have this behavior. Ironically, house crickets are rarely found indoors.

There are many predators to crickets, including humans. The amount of predators that feed on crickets in an area determines the life expectancy of these crickets. Most of these crickets do not die of old age. They are eaten by predators before they can live out their full life span. A natural balance, however, exists with the female crickets laying many eggs.

Climate is a significant cause of cricket’s short life span. In areas experiencing definite season changes, crickets live from spring until the start of winter.

They are born in the spring, lay eggs during fall and die when freezing temperatures set in. It means that most crickets have a typical life span of up to half a year.

In a warm environment, crickets can live for over a year. As much as cold weather shortens their life span, so does high temperatures.

Crickets have an average of 90 days to live. This life span applies more to field crickets. If they are kept as pets, crickets can live up to a year.

Various variables affect the life expectancy of crickets, as discussed above. It is possible for more than one of these variables to change a population of crickets in a particular region.

Crickets can cause damage indoors. They feed on fabrics, human food, and paper. The unpleasant chirping sound of the males can be irritating if they get indoors in large numbers. It is, therefore, advantageous to know more about these insects.