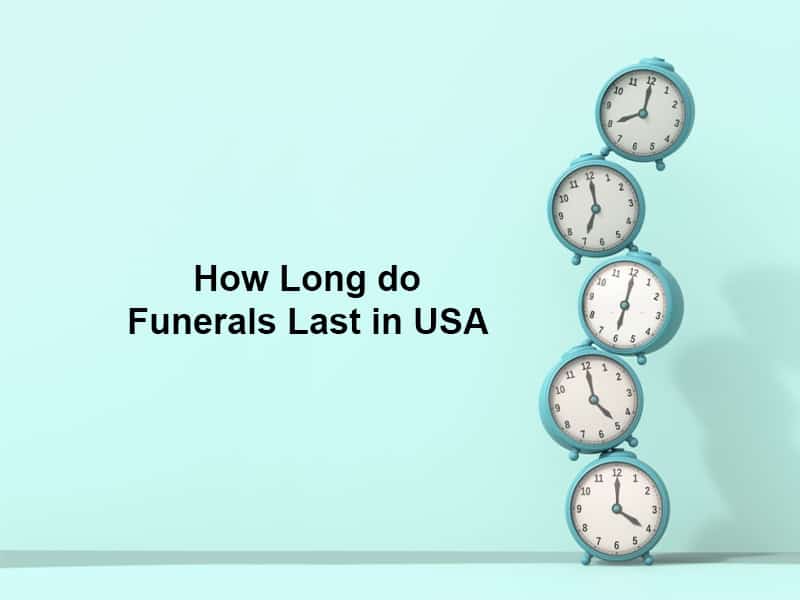 The USA is among the most diversified nations globally. It consists of various cultures from other continents such as Asia, Africa, and Latin America.

All the cultures, as mentioned above, have clustered and assimilated each other into creating new beliefs. Thus, several funeral customs have been embraced by Americans.

Funerals in the US are quite simple and hence last for a very short while.

Typically, most people usually participate in some types of rituals, and a procession to the burial site. The ceremonies and the amount of time taken vary depending on people’s culture, religion, or customs.

How Long do Funeral Last in the USA

A general funeral service may last for approximately one hour. However, there are some types of funerals that take days.

On the other hand, some funeral services may be as brief as 20-30 minutes.

deceased, type of funeral, and the customs involved.

A typically religious funeral service or mass may take approximately one hour. The following is a summary of time-length based on different religions:

Churches generally take approximately one hour to preach, and another one hour to allow other people to mourn the deceased.

Islamic funerals are meant to assist the grievers in managing their anguish and to give hope for a respectable afterlife. Their services usually last for around 30-60 minutes.

Hindu funerals have many traditions and customs that make the funeral last up to 13 days.

RECOMMENDED
How Long Can A Person Be On An ECMO Machine (And Why)?

Funerals can either take the form of burials or cremation. A standard burial may take around 20-30 minutes; however, other factors such as preaching and eulogies may extend the funeral to one hour or even more.

A cremation service takes approximately 30 minutes, while the burning and collecting of ashes may take about 3-4 hours.

Reasons why Funerals in the USA Last that Long

Realistically, funerals are affected by aspects such as religion and customs. However, the following analysis focuses on typical traditional American funerals only.

In most USA funerals, the funeral convoy usually includes cars, buses, trucks, and the hearse. The time taken depends on the distance covered.

This process usually involves a person giving their experiences with the deceased and the impact they had created in life.

At the burial-site, another small practice is done whereby the departed is given the final blessings from a clergyman.

Afterward, family and friends are given a chance to say their goodbyes and blessings to the deceased.

There has been a persistent practice in the USA that involves people picking up some soil and throwing it on a lowered coffin as a way of saying goodbye.

The family can then organize a meet-up for the attendees to eat and share stories before leaving.

Even though most people in the USA have embraced the procedure as mentioned above, most still include elements that are exclusive to their specific culture.