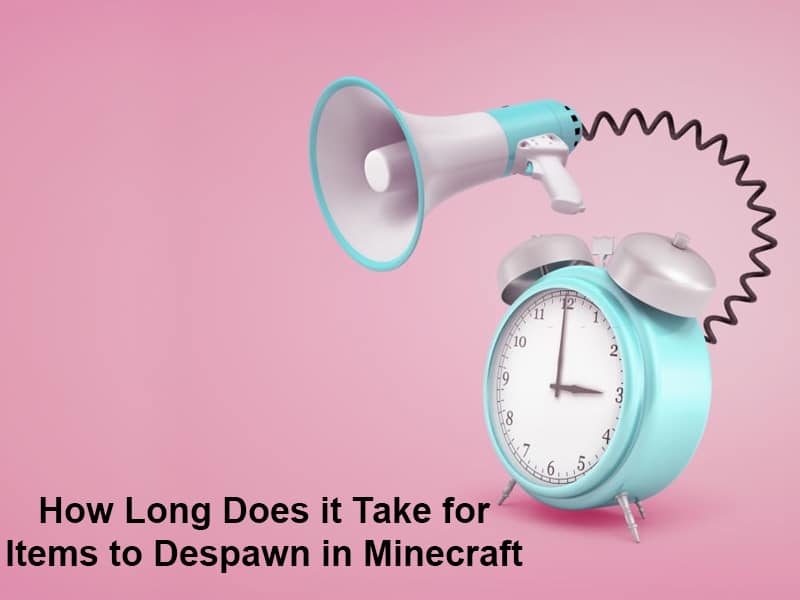 In Minecraft a mob, an item that you drop or an unplaced object is prone to disappear in a set amount of time depending on the time of the day and under particular situations. When objects or characters disappear form the game they are said to have despawned.

Most beginner players get surprised when they suddenly find out that all their items have disappeared. It is even possible to think that something might be wrong with the game the first time. This can be frustrating, especially after walking around in the game trying to find your placed items. Here is what you should know about entities disappearing in Minecraft.

How long does it take for items to despawn in Minecraft?

Any item that you as the player drop on the ground is going to despawn after 5 minutes. If you shoot arrows and they get stuck on any surface they are set to despawn after 1 minute. Endermites are set to disappear after 2 minutes If you drop an item next to a stack of the same kind it will appear to have disappeared immediately but the truth is that, it has been added to its stack. Tiny slimes may despawn after a period of time.

Situations that trigger the despawning of various characters and objects in the game.

If the creepers are not engaged for a period of time continuously, they will despawn which is mostly during the day although it can happen anytime. Zombie pigmen will also disappear if you don’t engage them for an extended period of time. Ocelots if not tamed will despawn. If leaves that were previously attached to a tree or a log fall to the ground they will despawn. When pigs despawn any saddles attached to them will also despawn. If you set the game to peaceful mode, most hostile mobs are likely to disappear. Items that fall on cactus and flames will get destroyed completely.

Characters that despawn depending on your proximity to them

RECOMMENDED
How Long Does it Take for Turtle Eggs to Hatch in Minecraft – (And Why)?

Situations that prevent items from despawning.

If you don’t want mobs or items to disappear, there some tricks you could do to prevent it, but here are a few situations when an item that usually despawns would not.

If you rename a mob it will not despawn. In the case of unloaded chucks, there will be no despawning. If there no players, in the case of a multiplayer mode, despawning does not happen.

Why it takes that long for items to despawn in Minecraft?

The items you collect and build get stored in your array list. For the purpose of proper memory management and to keep the game running efficiently despawned items get removed from your array list. Despawned items either get stored in the memory stack to be reallocated later or get removed from the program completely, and the memory gets re-used to store other data types.

What most players want to know with regard to despawning in Minecraft?

Does putting armor on compatible mobs able to prevent them from despawning?

Putting armor on mobs only stops spontaneous despawning but only within 128 blocks proximity to the player otherwise the mob still despawns.